The 340B Rebate Model: A Solution to the Contract Pharmacy Controversy

To learn more, download the whitepaper: The Kalderos 340B Rebate Model In Action: Ensuring a Thriving and Sustainable 340B Program.

Read on for Jeremy’s insights.

The 340B Rebate Model: A Solution to the Contract Pharmacy Controversy?
By Jeremy Docken, Founder and Chief Strategy Officer, Kalderos 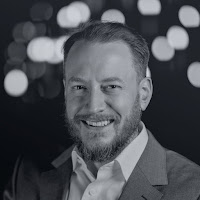 One potential solution to the impasse: the 340B rebate model, which Kalderos first proposed in 2020. The 340B rebate model, operationalized at contract pharmacies, is designed to support the needs of all stakeholders in 340B—covered entities and their contract pharmacy partners, third party administrators (TPAs), drug manufacturers and state Medicaid offices. It was developed after analyzing the root causes for why duplicate discounts continue to be an intractable problem, nearly 30 years after the 340B Drug Pricing Program was enacted, despite the best efforts of all parties.

As we’ve discovered through research with covered entities, manufacturers and Medicaid agencies, duplicate discounts continue to occur due to the outdated wholesaler chargeback system tasked with managing the majority of 340B transactions. Our rebate model addresses the limitations of wholesaler chargebacks, while still ensuring covered entities and the patients they serve continue to have access to 340B prices.

Because the rebate model facilitates the exchange of claims level detail for every 340B contract pharmacy dispense, drug manufacturers know from the outset which claims are 340B, and can ensure that the discount goes to the correct party—the covered entity. With a clear record that a 340B drug was dispensed, stakeholders will more effectively be able to identify duplicate 340B and Medicaid Drug Rebate Program discounts.

3 Axis Advisors is particularly well-known in the industry for their co-founders’ instrumental contribution to exposing drug pricing distortions in Ohio’s Medicaid managed care program, as well as nonprofit work through 46brooklyn Research. Kalderos was especially excited to work with 3 Axis on this study because of the firm’s considerable expertise in the U.S. healthcare system and drug supply chain, as well as project design and data aggregation and analysis.

To design the study, 3 Axis created two overall scenarios using a combination of real-world inputs. The first scenario modeled cash flow under the current replenishment model. The second scenario modified these inputs in light of a switch to a rebate model. Then, 3 Axis applied a sensitivity analysis to see the result of modifications to two key variables: 340B contract pharmacy volume as a percentage of the covered entity’s overall 340B volume, and current AWP brand discount applied to PBM reimbursements on contract pharmacy dispenses. The impact to cash flow was positive in all 25 configurations analyzed.

For a hypothetical covered entity that dispenses 10% of its 340B volume through a contract pharmacy and is currently reimbursed based on a 17.42% AWP brand discount, the report projected a 0.7% improvement in cash flow within the parameters of the study. 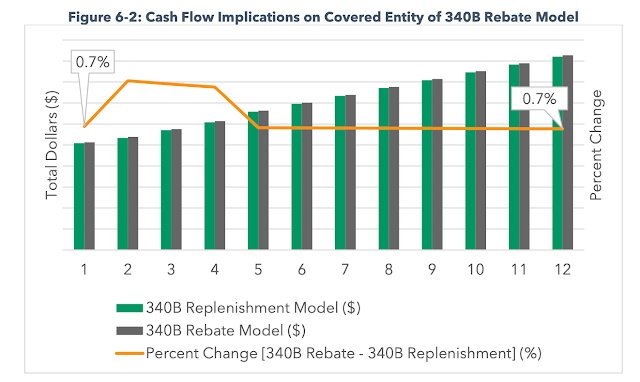 The higher the proportion of contract pharmacy volume as a share of a provider’s overall 340B program, the greater the positive impact on cash flow under the Kalderos rebate model. For instance, in the case of 50% contract pharmacy volume, currently reimbursed based on a 25% AWP brand discount, the 3 Axis study suggests a covered entity could see a 7.8% improvement in cash flow.

3 Axis identifies a few key factors contributing to the improved cash flow under the rebate model:

Higher revenues. Covered entities likely see slightly higher 340B revenues under the rebate model because the rebate is tied to WAC, as compared to contract pharmacy reimbursement predicated on PBM compensation with a brand discount applied.

A recent whitepaper from Kalderos gives greater context to the mechanics and operational impacts of the 340B rebate model, as well as its benefits for drug manufacturers and covered entities alike. The whitepaper also gives full details on the design and results of the 3 Axis study.

To learn more, download the whitepaper: The Kalderos 340B Rebate Model In Action: Ensuring a Thriving and Sustainable 340B Program.

Sponsored guest posts are bylined articles that are screened by Drug Channels to ensure a topical relevance to our exclusive audience. These posts do not necessarily reflect our opinions and should not be considered endorsements. To find out how you can publish a guest post on Drug Channels, please contact Paula Fein (paula@DrugChannels.net).