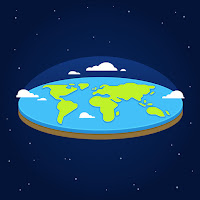 ICYMI: The econowonks at the Centers for Medicare & Medicaid Services (CMS) recently dropped the latest National Health Expenditure (NHE) data, which measures all U.S. spending on healthcare. Links below.

Today, I highlight the surprising insights from the latest figures. I examine the growth rates of major spending categories, break down costs vs. utilization, and highlight the unfavorable out-of-pocket dynamics for prescription drugs compared with hospital care.

Bonus: I also debrief you on CMS’s quinquennial comprehensive revision to the national spending data.

Regular readers know the unofficial motto of Drug Channels: "Everyone is entitled to their own opinion, but not their own facts." For 2021, I hope the drug pricing flat earthers (#DPFE) finally start to follow the data and acknowledge what’s really going on.

As always, I encourage you to review the CMS source materials: For crucial context about these data, see the Notes for Nerds section, below. As I explain there, CMS has also significantly restated its historical drug spending figures, which means they differ slightly from our previous analyses.

In keeping with previous years’ figures, spending on hospital care and professional healthcare services was more than six times higher than spending on outpatient prescription drugs: We can also understand the relative size of the three major spending categories by examining year-over-year growth in spending.
From 2018 to 2019, the U.S. spent $69.5 billion (+6.2%) more on hospital services and $46.4 billion (+4.7%) more on professional services. Meanwhile, spending on outpatient prescription drugs grew by $19.9 billion (+5.7%). 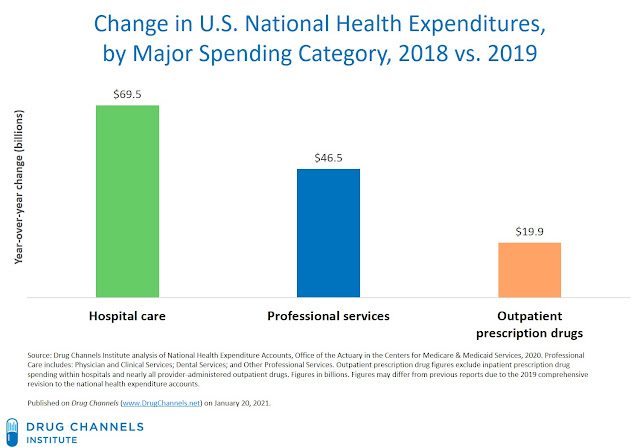 As I have noted in my previous analyses, hospitals and physicians often try to delegitimize the NHE as a measure of drug spending—so they can blame drugmakers for high healthcare spending. Demonizing pharmaceuticals as the prime driver of U.S. healthcare spending growth is simply not accurate.

In the Health Affairs linked above, CMS provided data on the two primary components behind changes in spending: The chart below deconstructs the total change in spending into its component parts.
[Click to Enlarge] 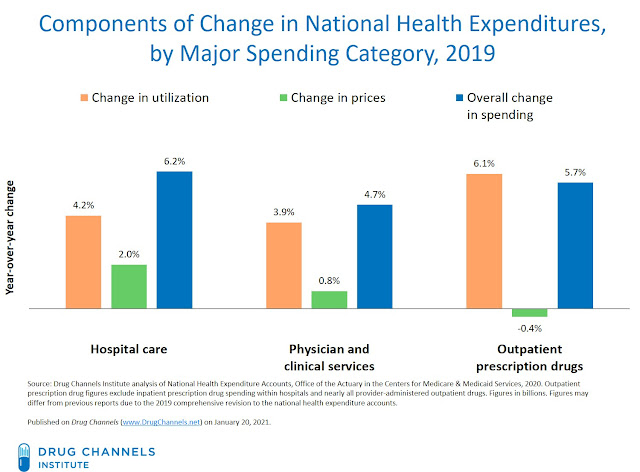 As you can see, more than 100% of drug spending growth resulted from growth in the number of people being treated and the number of prescriptions being dispensed. Utilization growth can be considered a positive trend, because it is well established that pharmaceutical spending reduces medical spending and improves patients’ health.

These figures are also comparable to the cost vs. utilization figures from my analysis of PBM drug trend reports. See PBMs and Drug Spending in 2019: CVS Health and Express Scripts Outperform Prime Therapeutics.

In 2019, consumers’ out-of-pocket expenses—cash-pay prescriptions plus copayments and coinsurance—accounted for 14.5% of net drug spending. Per my commentary in Drug Pricing Policy in 2021: Four Crucial Consequences of Pharmacy Benefits Today, some patients end up paying a much greater share of costs due to pharmacy benefit designs.

Another unusual aspect of U.S. healthcare is the relative share of costs that patients bear for different services. For 2019:
[Click to Enlarge] 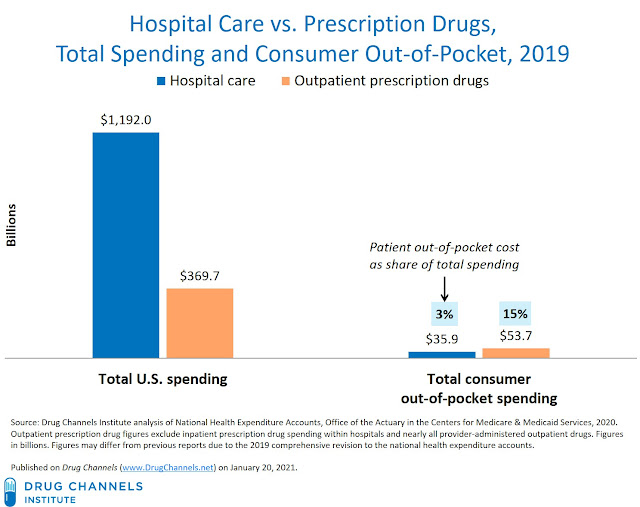 This unfortunate benefit design discrepancy partly explains why consumers are so much more unhappy about prescription drug spending than they are about hospital spending. It’s also another reason I consider copay accumulator adjustment to be so unfair to patients.

As the new administration takes over, let’s hope the latest NHE facts help balance the public discussion of U.S. healthcare spending. And the next time someone tells you that rising U.S. healthcare costs are due to "skyrocketing drug prices," ask them if they also belong to this organization.