The Booming Biosimilar Market of 2020

The biosimilar market is finally beginning to fulfill its promise.

The latest data show that provider-administered biosimilar drugs are successfully displacing their reference biological products. As I predicted last year, newer biosimilars are being adopted quickly, and their prices are declining rapidly. What’s more, manufacturers of reference products are cutting drug prices to defend their market shares.

Last year, Dr. Scott Gottlieb, a former FDA commissioner, argued that we shouldn’t give up on biosimilars and prematurely regulate prices. As you will see below, Dr. Gottlieb was right.

The material in today’s article is adapted from our forthcoming 2020–21 Economic Report on Pharmaceutical Wholesalers and Specialty Distributors, now available for preorder at special discounted launch pricing.

Twenty of the 28 FDA-approved biosimilars are provider-administered products covered primarily under a patient’s medical benefit. Many innovator drugs now compete with multiple biosimilar versions, including Herceptin (5 versions) and Remicade (4).

The chart below shows the unit market share for the biosimilar versions of seven reference provider-administered biologics. Note that the biosimilars for these products are being marketed as brand alternatives, not as interchangeable generics. As you can see, biosimilar adoption rates for the newest categories are spiking upwards. 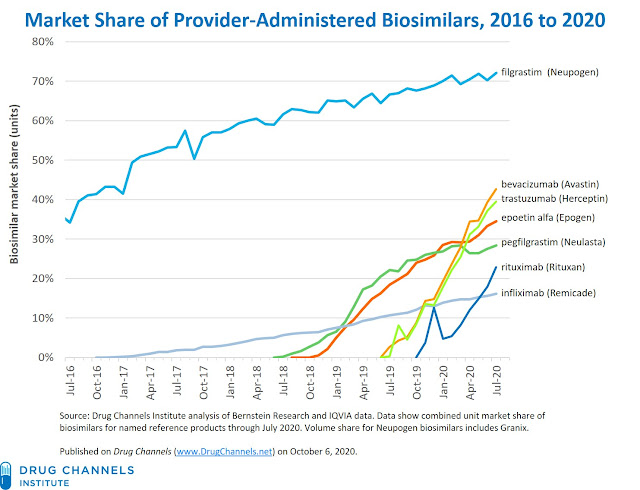 Here are brief overviews of the products shown above: NEVER TELL ME THE ODDS

The adoption rates above are translating into big savings. As you can see in the chart below, Ronny Gal at Bernstein calculates that biosimilar savings are now $6.5 billion (annualized) and growing. 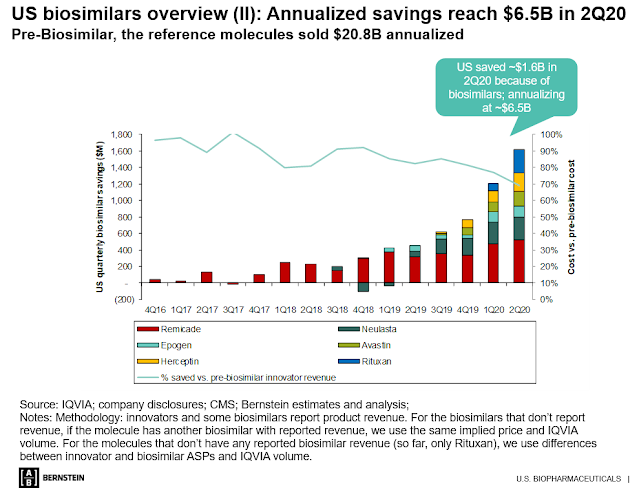 This doesn’t mean that the biosimilar market is filled with sunshine and wookies, however.

Buy-and-bill reimbursement dynamics affect the substitution of provider-administered biosimilars, although these impacts are not straightforward. For a deep dive into buy-and-bill, see Chapters 3 and 6 of our 2020–21 Economic Report on Pharmaceutical Wholesalers and Specialty Distributors.

Payers and providers are also slowing biosimilar adoption. For example, biosimilars are often not preferred over reference products at many of the largest U.S. commercial health plans. (source) Physician preferences can slow adoption, too. A 2019 survey found that a majority (61%) of oncology physicians still prefer not to use biosimilars, use them only for supportive care, or prefer not to switch patients. (source) The data above show that these attitudes may be slowly starting to change.

Some have argued that we should “throw in the towel” on biosimilars and begin regulating their prices. I find this lack of faith disturbing.

As I concluded in my review last year, regulatory and legislative changes could help by altering incentives for providers, physicians, and payers. But such changes are not our only hope.

We should all recognize the power of market forces. Biosimilar adoption is increasing, competition is accelerating, and prices are dropping. That's why 2020 represents an important inflection point. As Dr. Gottlieb often says: “Do. Or do not. There is no try.”