This week, I’m rerunning some popular posts while I prepare for this Friday’s video webinar: Industry Update and COVID-19 Impact: PBMs & Payers.

Part D reform has faded from the policy debate. This rerun explains why it is still needed. FYI, this is my favorite article from 2020 (so far).

Our high-list-price/high-rebate system remains a fundamental source of warped incentives and cascading problems within the Medicare Part D program.

For proof, check out the previously unpublished data below on market share for products that treat hepatitis C. Despite manufacturers offering products with lower list prices, Medicare Part D plans have rejected the therapeutically identical but lower-priced versions of these drugs.

List prices significantly affect seniors’ out of-pocket costs, so Part D plans are needlessly costing many of them thousands of dollars. The federal government's Medicare spending is also unnecessarily higher.

Understanding the Part D pricing issues requires a brief detour into the treatment of chronic hepatitis C virus (HCV):
The drugs that treat HCV are not inexpensive. Here are the five most utilized products and their list prices for a typical course of therapy:
Note that Epclusa AG, Harvoni AG, and Mavyret have much lower list prices than those of the branded Harvoni and Epclusa products.

These list prices do not meaningfully reflect the net cost to a payer, because rebates can be substantial. . In fact, I suspect that the net, post-rebate prices of these drugs are fairly comparable.

Students of economics might assume that the market will choose the products with the lowest prices.

For example, the branded and authorized generic versions of Harvoni and Epclusa are identical products. So, you might think that the plans would naturally prefer the lower-priced version because the patient is getting the exact same product.

Alas, that’s not how the U.S. drug channel works.

Below are data on new prescriptions for the five HCV products we’ve listed above. These data include only those patients who had not initiated therapy on any HCV product in the prior year. The results cover the three major payers: Medicare Part D, commercial health plans, and Medicaid. (Special thanks to IQVIA for sharing these previously unpublished data.)

As you can see, there are some startling differences in Medicare Part D compared with the other payers.
PATIENT IMPACT

Here’s why the structure of the Medicare Part D benefit makes the market share of high list price drugs so troubling.

Medicare beneficiaries, unlike those in most private insurance plans, can face unlimited out-of-pocket prescription drug costs if they reach the catastrophic coverage limit. Medicare covers 80% of the cost in the catastrophic phase, while plans pay 15% and the beneficiary pays 5% coinsurance.

Progression through the Part D benefit tiers is based on the prescription price negotiated between the plan and the pharmacy. That negotiated price excludes rebates, so beneficiaries reach catastrophic coverage—and its unbounded 5% out-of-pocket expense—sooner when using products with higher list prices.

Manufacturers are not permitted to provide copayment support to beneficiaries of federal healthcare programs, so the burden of using a higher-price product falls entirely on the patient.

Consider the following data from The Out-of-Pocket Cost Burden for Specialty Drugs in Medicare Part D in 2019: 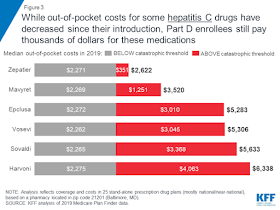 Despite the out-of-pocket advantages, the market share data above demonstrate that half of seniors in Part D plans are still initiating therapy with branded Harvoni and Epclusa instead of the lower list price alternatives. That's crazy.

Part D plans and their PBMs appear to prefer drugs with higher list prices and higher rebates. Such products push more beneficiaries into the catastrophic reinsurance phase, where the plan liability is low.

Here’s the twist: Plans can use the additional rebates earned from the high-list price products to reduce monthly premiums and grab more Part D market share. The weird math of Part D bidding and its benefit structure encourage this gaming. For an explanation, see Will CMS Pop the Gross-to-Net Bubble in Medicare Part D With Point-of-Sale Rebates?.

Part D plans’ continued use of brand Harvoni and Epclusa exemplifies how patients don’t benefit directly from rebates on the drugs they use.

This behavior is not limited to Medicare. As I highlight in Express Scripts vs. CVS Health: Five Lessons From the 2020 Formulary Exclusions and Some Thoughts on Patient Impact, PBMs often exclude the low-list price versions of the hepatitis C drugs from their preferred commercial formularies. Commercial payers have at least some incentives to choose lower drug prices.