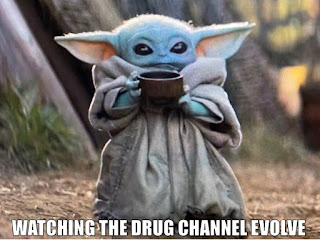 This week, I’m rerunning some popular posts while I prepare for this Friday’s video webinar: Industry Update and COVID-19 Impact: PBMs & Payers.

I suspect this deal will remain profitable for the participating companies even as COVID-19 alters the US. prescription payer mix. Click here to see the original post and comments from January 2020. National market shares for the largest PBMs in 2019 appears as Exhibit 88 of our 2020 Economic Report on U.S. Pharmacies and Pharmacy Benefit Managers.

P.S. Sorry that today's meme is one day too late for Star Wars day.

There's been very little written about this transaction, though it has potentially major implications. Below, I share my thoughts on the following topics arising from the deal:
A few weeks ago, I explained why integrated insurer / PBM / specialty pharmacy / provider organizations are poised to restructure U.S. drug channels. The Express Scripts / Prime deal signals that the channel will continue its amazing pace of reinvention.

The scale, scope, and interconnectedness of today’s market participants make the system increasingly resistant to massive disruption from either external players like Amazon or a government takeover. Like it or not, the channel will continue to gain power and extract profit. Read on and see if you agree.

For additional background for today’s post, I spoke with Tim Wentworth, CEO of Express Scripts, and Jarrod Henshaw, Prime’s Senior Vice President, Chief Supply Chain and Industry Relations Officer. The opinions and interpretations below, however, are my own.

Here’s a brief summary of the new relationship between Express Scripts and Prime Therapeutics.
The press release carefully refers to the deal as a collaboration rather than as an alliance, acquisition, or merger. The release further states that “Express Scripts will provide services to Prime” and that “both companies will continue to work independently with pharmaceutical manufacturers.” That wording highlights the theoretically temporary nature of the relationship.

This structure means that Prime’s customers will not automatically default to the Express Scripts’ formularies and pharmacy networks. Executives from both companies stressed to me that Express Scripts will customize its services to Prime’s individual plan clients.

Here are four observations and takeaways from this new arrangement:

1. Manufacturers and pharmacies will face the biggest PBM ever.


By adding the Prime volume, Express Scripts will be leading rebate negotiations and pharmacy network development for 103 million people. This combined volume of Express Scripts and Prime will have enormous leverage with manufacturers and pharmacies.

The chart below shows national market shares for the largest PBMs in 2018. As you can see, about three-quarters of all equivalent prescription claims were processed by three companies: CVS Health (including Caremark and Aetna), Express Scripts, and the OptumRx business of UnitedHealth. FYI, these data appear in Section 5.2. of our 2019 Economic Report on U.S. Pharmacies and Pharmacy Benefit Managers. Our updated data and market analyses will appear in the forthcoming 2020 edition, which will be available on March 10. 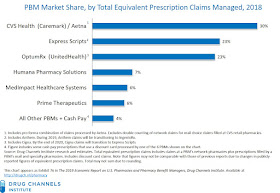 This concentration helps plan sponsors and payers, who can maximize their negotiating leverage by combining their prescription volumes within a small number of PBMs. However, the ever-growing concentration of buying power will remain controversial—especially for the drugmakers and pharmacies that will be on the receiving end of Express Scripts’ new scale.


Here’s one important angle that was not mentioned in the press release: Prime will source formulary rebates via Ascent Health Services, the secretive Switzerland-based group purchasing organization (GPO) that Express Scripts launched in 2019.

There are at least two apparent motivations for this move:
The second motive also implies a possible hedge against reform of PBM pricing practices.

Multiple regulatory and legislative proposals would prohibit manufacturers from paying PBMs administrative service fees (“admin fees”) that are based on a percentage of sales or drug list prices.

However, there is no parallel effort to alter GPO safe harbor rules. Today, GPOs are compensated via manufacturer-paid administrative fees that are typically computed as a percentage of the purchase price that the healthcare provider pays for a product bought through a GPO contract. A GPO works on behalf of its members. By aggregating the purchasing volume of its members, a GPO lowers its members’ cost of goods and reduces in-house contracting functions.

It seems as if Ascent is acting as a rebate aggregator for the combined formulary volume of Express Scripts and Prime Therapeutics. The members of the Ascent GPO can then structure their own contracts and arrangements with their respective plan sponsor clients.

Executives at both Express Scripts and Prime emphasized to me that Ascent provides significant transparency to its PBM members. However, I’m still not clear on how much transparency the plan sponsor clients of each PBM have into Ascent’s operations. Inserting another intermediary in the drug channel always adds transparency, right?
3. This transaction poses fresh challenges for Walgreens Boots Alliance.

In 2017, WBA and Prime Therapeutics completed the formation of AllianceRx Walgreens Prime. It is the exclusive mail and specialty pharmacy for Prime Therapeutics’ PBM beneficiaries, and is also able to contract with (and dispense for) other PBMs and plans. Legally, the business is a subsidiary of WBA, so its financials are included within WBA’s broader financial reporting. WBA does not report separate revenues for the business, so the revenue figure in our list of the largest 15 specialty pharmacies reflects Drug Channels institute estimates.

It’s not clear that the Prime deal has ever lived up to its promise for Walgreens. Prime Therapeutics has grown more slowly than its larger peers, which has meant less incremental growth for Walgreens. In addition, I perceive that Prime’s Blue Cross and Blue Shield clients have been less aggressive in using limited and exclusive pharmacy networks for specialty drugs.

Consequently, AllianceRx Walgreens Prime didn’t get the same boost that other PBM-owned specialty pharmacies have received. And for its non-Prime business, AllianceRx Walgreens Prime ended up in a position similar to that of other independent specialty pharmacies. The super-profitable 340B contract pharmacy business has essentially saved Walgreens pharmacy. See Here’s How PBMs and Specialty Pharmacies Snag Super-Size Profits from the 340B Program .

Prime’s Jarrod Henshaw offered me only a “no comment” when I asked about the future of AllianceRx Walgreens Prime.

Another question to ponder: Will Prime buy generics with Express Scripts?

Express Scripts has partnered with Walgreens Boots Alliance Development (WBAD) to purchase generic drugs. Express is participating via its Innovative Product Alignment (IPA) subsidiary. Prime acquires generics though its WBA pharmacy relationship. (See Section 2.3.3. of our 2019–20 Economic Report on Pharmaceutical Wholesalers and Specialty Distributors.) Alas, neither Prime nor Express Scripts executives were willing to say what their new deal might mean for IPA or WBAD.

Does all of this mean that the Walgreens-Prime relationship will fall apart? Or that Cigna will co-invest with private equity in a leveraged buyout of—or acquire the U.S. pharmacy business of—WBA?

Hmm. Perhaps WBA’s management will deign to address these topics on tomorrow’s earnings call—but I doubt it.
4. The FTC is unlikely to intervene in the arrangement.


The Federal Trade Commission (FTC) will probably consider the Express Scripts-Prime deal to be pro-competitive. That’s because the FTC will likely determine that the arrangement lowers healthcare costs and will therefore be beneficial to consumers.

Here’s why: The relationship between a PBM and pharmacies or manufacturers can best be described as an oligopsony—a market with many sellers but few buyers. Pharmacies and manufacturers are not really customers of a PBM in the context of the drug supply chain. They are sellers of goods (manufacturers) or dispensing services (pharmacies) that a PBM use to create its benefit management service.

For context, you may want to revisit the FTC’s decision in the Express Scripts-Medco Health Solutions merger. I reviewed it in 2012’s ESRX-MHS: Analysis of the FTC Decision.

I know that many readers will be disappointed with my take. Feel free to leave your own thoughts in the comments below.
WHAT’S NEXT?

The Express Scripts deals preserves the company’s options and flexibility. However, it also creates a logical pathway for being acquired or absorbed into Cigna.

Today, Prime operates as a pass-through PBM for the 18 Blue Cross and Blue Shield health plans that have ownership stakes in the business. Prime also provides PBM services for five additional plans and direct employer groups. It handles benefits for more than 28 million people. Prime’s management believes that the Express Scripts deal will allow it to become more competitive and therefore add more customers.

When asked about potential conflicts over new customers, Express Scripts CEO Tim Wentworth told me that his company would be “biased toward helping Prime win business with new Blues plans.” This sentiment is consistent with the nature of the services agreement with Prime.

I suspect that we will look back on Prime’s strategic shift as another move toward vertical consolidation and the disappearance of the PBM industry as we have known it. Underway, the PBM endgame is.