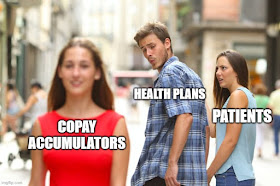 COVID-19 has not stopped the wheels of policy bureaucracy from grinding. Last week, the Centers for Medicare and Medicaid Services (CMS) released its final Notice of Benefit and Payment Parameters for the 2021 benefit year. You’ll find the document links below.

This final rule permits insurers to exclude the value of a pharmaceutical manufacturer’s copay support program from a patient’s annual deductible and out-of-pocket maximum obligations.

Translation: CMS has confirmed that insurers have the option to use copay accumulator adjustment for their pharmacy benefit programs.

Patients on specialty drugs lose big from accumulators, while plans profit from the lower spending that results. Consequently, copay maximizers have emerged as a more patient-friendly alternative to accumulators. Below, I remind you of the math behind these alternatives.

Pharmaceutical manufacturers offer copayment offset programs (also called copay cards or coupons) that cover the beneficiary’s out-of-pocket costs for a brand-name drug. These programs support beneficiaries with commercial insurance, but they cannot be used by enrollees in government programs such as Medicare Part D.

Manufacturers’ copay support payments have been growing at double-digit rates, along with the adoption of benefit designs that favor deductible and coinsurance spending. (See Employer Pharmacy Benefits in 2019: High Deductibles and Greater Coinsurance Expose Even More Patients to Prescription List Prices.) Drug Channels Institute estimates that in 2019, manufacturers spent $15 billion on these programs.

A few years ago, plan sponsors began adopting copay accumulator adjustment programs in their benefit designs. I first described these programs in the January 2018 post Copay Accumulators: Costly Consequences of a New Cost-Shifting Pharmacy Benefit. (FYI, this post marks the one and only time that Porgs have appeared on Drug Channels.)

Under an accumulator program, the manufacturer’s copay support does not count toward the patient’s deductible or out-of-pocket maximum obligations. This reduces the plan’s cost by shifting more drug costs to patients and manufacturers.

A patient’s out-of-pocket costs with accumulators can be thousands of dollars, due largely to plans with coinsurance and deductibles. Most of these drugs are single-source therapies with no equivalent generic version or therapeutic alternative.

Patients don’t decide to forgo cancer or HIV treatment because they now have a “consumer-oriented” incentive. More likely, they will just stop filling their specialty drug prescriptions. That’s why copay accumulators decrease patients’ adherence to specialty therapies. See Impact of a Co-pay Accumulator Adjustment Program on Specialty Drug Adherence from The American Journal of Managed Care.

These patient effects have prompted state laws that govern accumulators. In 2019, four states—Arizona, Illinois, Virginia, and West Virginia—passed laws that ban or restrict the use of accumulators in individual and small group healthcare plans. However, states do not have the authority to ban accumulators in self-insured plans, which account for the majority of commercial insurance.

For more on the data and plan designs behind patients’ out-of-pocket costs, see Chapter 6 of our 2020 Economic Report on U.S. Pharmacies and Pharmacy Benefit Managers.

Last year, CMS finalized a rule that prohibited copay accumulator programs for brand drugs that did not have a generic equivalent. This was a sensible compromise, given the significant potential for negative patient harm.

However, the agency delayed implementation of this rule, because of possible conflicts with certain rules for high-deductible health plans.

This February, CMS proposed an updated rule that provided plans with the flexibility to exclude a manufacturer’s copay support payment from the computation of a deductible—without regard to whether a drug has a generic equivalent. This is the rule that was finalized last week. It applies to issuers of non-grandfathered individual and group market plans. Click here for a direct link to the relevant section of the rule: Cost-sharing requirements (§ 156.130)

Notably, CMS warned that plans must clearly identify the presence of copay accumulators to beneficiaries. The agency wrote:


“For issuers and group health plans that do make changes to their longstanding practices, we continue to encourage transparency with regard to changes in how direct drug manufacturer support amounts count towards the annual limitation on cost sharing. For example, we encourage issuers to prominently include this information on websites and in brochures, plan summary documents, and other collateral material that consumers may use to select, plan, and understand their benefits. If we find that such transparency is not provided, HHS may consider future rulemaking to require that issuers provide this information in plan documents and collateral material.” (source)

As far as I can tell, the CMS rule on accumulators would not stop plans from adopting closely related copay maximizer programs.

Under a copay maximizer, the full value of the manufacturer's copayment program is applied evenly throughout the benefit year. A maximizer has an advantage over an accumulator because it reduces or eliminates the patient’s out-of-pocket obligations. The patient's actual out-of-pocket costs can be low enough that they never reach their annual deductible and out-of-pocket maximum.

Our detailed analyses below trace the flow of funds for the traditional scenario compared with scenarios for copay accumulator adjustment and copay maximizer. I first shared this model in my 2018 article Copay Accumulator Update: Widespread Adoption As Manufacturers and Maximizers Limit Patient Impact. (If the eyestrain-o-vision font is too hard to read, click here to download a PDF with the analysis.) 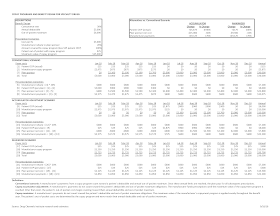 The growth of maximizers is enabling the value of copay programs to accrue to plan sponsors that establish plans with high deductibles for specialty drugs. The CMS final rule has now accelerated the trend.

Maximizers may seem harmless, but the CMS rule ignores some crucial real-world distinctions between how PBMs are implementing maximizers and accumulators.

However, maximizer-like programs are being established with unusual organizational arrangements and potentially ruinous copay obligations for the patient:
So what’s going on here? In my next article, I’ll probe the odd structure of maximizer programs by examining PBMs’ mysterious business partners.