Last week, the econowonks at the Centers for Medicare & Medicaid Services (CMS) released the 2018 National Health Expenditure (NHE) data, which measures all U.S. spending on healthcare. Links below.

Some drug spending highlights:
These latest CMS data also highlight why the policy debate over healthcare spending is so unbalanced. Too many people—including politicians, journalists, and a certain billionaire—have committed to a false narrative of “skyrocketing” drug spending. I must again note that demonizing pharmaceuticals as the prime driver of U.S. healthcare spending is simply wrong, as you will see below.

Unfortunately, the share and amount that Americans are forced to pay of prescription drug spending is much greater than that of other healthcare services. This circumstance derives from benefit designs, not drug prices. See what you think in our pretty charts below.

If you register but can't make it this Friday, you'll receive a link to watch the replay.

As always, I encourage you to review the CMS source materials:
For crucial context about these data, see the Notes for Nerds section below.

As measured in the National Health Expenditures (NHE) accounts, total U.S. spending on healthcare was an astounding $3.6 trillion in 2018.

In keeping with previous years’ figures, spending on hospital care and professional healthcare services was more than six times higher than spending on outpatient prescription drugs:
We can also understand the relative size of the three major spending categories by examining year-over-year growth in spending. From 2017 to 2018, the U.S. spent $51.2 billion more on hospital services and $41 billion more on professional services. Meanwhile, spending on outpatient prescription drugs grew by comparatively small $8.3 billion. 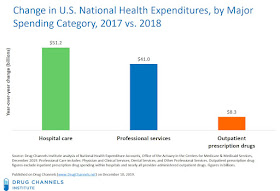 Note that these drug spending data measure net, post-rebate spending on patient administered drugs that are paid under the pharmacy benefit. Inpatient prescription drug spending within hospitals and nearly all provider-administered outpatient drugs are reported within the hospital and professional services categories.

However, drug spending accounts for a very small share of these other categories. For example, Part B spending at hospitals accounted for less than 5% of Medicare’s $1.2 trillion in total payments to hospitals. (I discuss these data here: Part B Update: Hospitals Displacing Physicians, Amid Slow Growth in Drug Prices.)

Is it any wonder that hospitals and physicians often try to delegitimize the NHE as a measure of drug spending so as to shift blame to drugmakers for high healthcare spending?

Spending on outpatient prescription drugs in 2018 grew by 2.5%, compared with a (revised) 1.4% increase for 2017. The 2018 figure is still slower than overall national health expenditures, which increased by 4.6%. 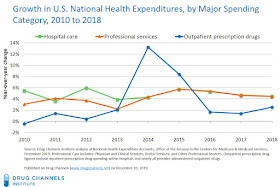 The only exceptions occurred in 2014 and 2015, due to strong growth in spending for drugs used to cure hepatitis C. The net, post-rebate costs for those drugs have plummeted due to competition—though patients don’t always benefit from these rebates.

This slow growth in drug spending is consistent with the data from the largest pharmacy benefit managers (PBMs) shown in Which PBM Best Managed Drug Spending in 2018: CVS Health, Express Scripts, MedImpact, or Prime Therapeutics?

CMS attributed the 2018 drug spending growth to utilization, not prices. Here’s an excerpt from its Health Affairs article:


“In 2018 faster growth in nonprice factors helped drive the increase in total retail prescription drug spending growth, while price growth for both generic and brand-name drugs slowed. The number of prescriptions dispensed (based on thirty days’ supply) increased 2.7 percent, which was faster than the 2017 growth rate of 1.8 percent … Retail prescription drug prices declined by 1.0 percent in 2018, reflecting a decline in generic drug prices and slower and relatively low growth in prices for brand-name drugs. Additionally, greater use of generic drugs in 2018 put downward pressure on prices, even though the change in the generic dispensing rate was the smallest since 2000—an increase of just 0.3 percentage points to 85.6 percent.”

Instead, patients care about their out-of-pocket spending. When people complain about “drug prices,” they are actually complaining about the share of costs that they pay—and how those costs are computed.

In 2018, consumers’ out-of-pocket expenses—cash-pay prescriptions plus copayments and coinsurance—accounted for 14% of spending and grew by only 0.6%. But as I note in Employer Pharmacy Benefits in 2019: High Deductibles and Greater Coinsurance Expose Even More Patients to Prescription List Prices, some patients end up paying a much greater share of costs due to pharmacy benefit designs.

Another unusual aspect of U.S. healthcare is the relative share of costs borne by patients for different services. For 2018, total U.S. spending on hospital care was more than $857 billion higher than prescription drug spending. However, consumers’ out-of-pocket spending for hospital care ($34.8 billion) was more than $12 billion lower than consumers’ out-of-pocket spending for outpatient prescriptions ($47.1 billion). 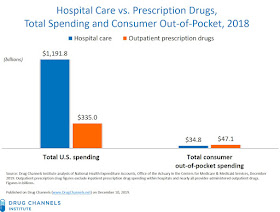 The gross-to-net bubble plays an unfortunate part in this story, too. More than half of insured patients’ out-of-pocket prescription costs are tied to the list price, not the post-rebate net cost. See my comments in Half-Off Sale! Five Major Drugmakers Reveal Vast Gross-to-Net Price Gaps—and Why Rebate Reform Is Still Needed.

This benefit design discrepancy partly explains why consumers are so much more unhappy about prescription drug spending than they are about hospital spending. Of course, hospitals are starting to change this perspective by relentlessly suing poor patients. That’s not really a good thing.

Regular readers know the unofficial motto of Drug Channels: "Everyone is entitled to their own opinion, but not their own facts." Every year, I hope that the latest NHE data will bring balance to the public discussion of U.S. healthcare spending.

And every year, I’m disappointed. 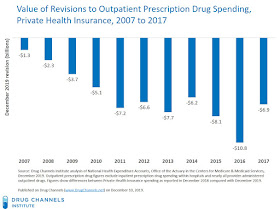