This week, I’m rerunning some popular posts before the holidays. Click here to see the original post and comments from August 2019.

Today, let’s follow the prescription dollar to expose how specialty pharmacies and covered entities profit from 340B prescriptions. We rely on confidential disclosures made to the U.S. Government Accountability Office (GAO).

You’ll see the indisputable prescription math that permits large specialty pharmacies to share in the 340B discounts that covered entities earn. These pharmacies’ profits can be $1,000 per prescription—far exceeding their typical profits from dispensing a third-party-paid prescription.

No wonder PBMs and specialty pharmacies are racing to become 340B contract pharmacies!

For years, hospitals and their lobbyists have been claiming that discounts from the 340B program support care for low-income and uninsured patients. What they don’t say: These discounts are also supporting some of the largest public companies in the U.S.

Today’s article extends our 2019 series exploring the hidden economic mysteries of the 340B Drug Pricing Program. Here are three of our related previous articles:
For broader background on 340B’s role in the pharmacy industry, see section 11.5 of our 2019 Economic Report on U.S. Pharmacies and Pharmacy Benefit Managers.

By using contract pharmacies, a 340B covered entity profits from prescriptions filled by a pharmacy that is not owned or operated by the covered entity. They do this after the prescription has been adjudicated and paid by such third-party payers as Medicare Part D and commercial health plans. (Medicaid prescriptions are excluded by statute.)

Below, I have shared Exhibit 168 from our 2019 Economic Report on U.S. Pharmacies and Pharmacy Benefit Managers. This chart summarizes the activities and flow of funds. 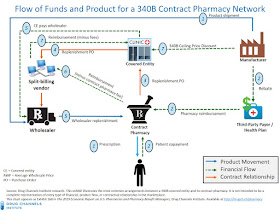 The 340B ceiling price is equivalent to the Medicaid net price.

Today, hospitals and other 340B covered entities can acquire many brand-name specialty pharmaceuticals for as little as $0.01, a practice known as penny pricing. This occurs when the calculation for a 340B price yields zero, which means that a drug has hit its 100% Medicaid rebate cap.

For instance, AbbVie recently disclosed that Humira, the top-selling drug in the U.S., hit the rebate cap starting in the second quarter of 2016. (source) Since that time, 340B hospitals have been able to buy Humira for $0.01. That’s a good deal on Humira, don’t you think?

HOP ON THE MONEY TRAIN!

Rather than earning traditional dispensing spreads and fees, 340B contract pharmacies earn per-prescription fees paid by the 340B entity.

In 2018, the U.S. Government Accountability Office (GAO) revealed confidential information about fee arrangements in 28 contracts between pharmacies and 340B covered entities. I discussed this report in GAO Confirms It: 340B Hospitals and Contract Pharmacies Profit from Low-Income, Uninsured Patients.

Page 56 of the GAO report described agreements with three basic structures for payments to 340B contract pharmacies:
For drugs that reach the Medicaid rebate cap, the 340B acquisition cost is $0.01, and a pharmacy’s payment from Type 3 would equal the payment from Type 2.

About half of the agreements in the GAO study were Type 1. The rest were Type 2 or Type 3. The table below, which appears as Exhibit 169 in our 2019 pharmacy/PBM report , summarizes these fee arrangements and some important notes.

With the background above, we can follow the dollar straight to the extraordinary profits for a 340B contract pharmacy.

Consider a prescription with the following characteristics:
The table below traces profits for the 340B covered entity and the pharmacy. We show the math for all three types of contractual arrangements between a 340B hospital and its contract pharmacy. We assume here that the pharmacy retains the dispensing and service fees that the PBM and manufacturer paid. 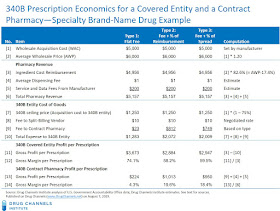 As you can see, a 340B hospital can earn thousands of dollars from a prescription that it never dispenses. It earns about $3,000 even after sharing a portion of the 340B savings with a contract pharmacy.

When a 340B contract pharmacy is compensated using a flat fee (Type 1), its total compensation is comparable to what it would earn from a third-party payer. The GAO found that such flat fees were present only in about half of contract pharmacy agreements.

When compensated under agreement Type 2 and 3, the contract pharmacy earns a windfall profits of about $1,000 per prescription. That’s about three to four times larger than a specialty pharmacy’s typical gross profit from a third-party payer.

The superior profitability of 340B lets hospitals offer generous pharmacy fees and share a percentage of the prescription savings with the contract pharmacy. A hospital can capture the entire value of a specialty drug prescription, so there’s plenty of money sloshing around to overpay specialty pharmacies.

That coinsurance percentage is based on the ingredient cost in Line [3] negotiated between the pharmacy and the PBM, not on the discounted 340B cost. Thus, it’s common for a fully-insured patient to pay more than $1,200 out of pocket, even as the hospital and pharmacy pay $0.01 for the drug and generate thousands of dollars in profit.

The contract pharmacy portion of the 340B Drug Pricing Program operates within a tangle of sub-regulatory guidance, private letters, and “Frequently Asked Questions” posted to the HRSA website.

There’s also no transparency into fees and profits generated by 340B contract pharmacies, beyond what was disclosed in last year’s GAO report.

The GAO found that an astounding share of covered entities—33% of federal grantees and 57% of hospitals—did not provide discounts to low-income, uninsured patients. I am stunned by this revelation. Poor patients paid full price, while the hospitals collected big discounts.

I suppose we shouldn’t be surprised by profiteering among specialty pharmacies. Oversize pharmacy profits, while technically legal, have stretched the program’s goals beyond recognition. Multi-billion, for-profit companies are capturing money intended for 340B hospitals and other covered entities.

But it’s disappointing that no one in the 340B community is willing to confront these issues. When will someone finally stand up to remedy these problems?