This week, I’m rerunning some popular posts before the holidays. Click here to see the original post and comments from September 2019. It’s a timely rerun, given rumors that the Senate Finance Committee's Prescription Drug Pricing Reduction Act may add a provision requiring rebates on insulin to be passed along to seniors at the pharmacy counter. Until then, the gross-to-net bubble is alive and well.

P.S. Yesterday, I posted my $0.02 on the new importation guidance and proposal on @DrugChannels. You can read them here, here, and here. 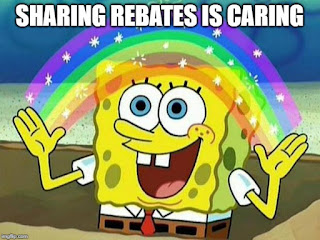 Third-party payers' benefit designs remain a significant barrier to addressing drug costs. Many continue to use the ever-growing rebate dollars of the gross-to-net bubble to offset overall plan costs rather than reducing patient’s out-of-pocket spending.

Pharmaceuticals are the only part of the U.S. healthcare system where the difference between list and net prices is monetized as rebates and redistributed by intermediaries to payers. But we’ve seen that moving to a world without rebates may not be possible, given the drug channel’s entrenched interests and payers’ established economics.

POS rebates may therefore be our most realistic chance for addressing the drug costs of patients trapped in the gross-to-net bubble. Commercial payers and Congress (for Medicare Part D) should get started ASAP with POS rebates for insulin—a highly rebated and massively distorted therapeutic category.

In my previous post, I highlighted that brand-name drugmakers sell their products for half of the list prices. However, patients are increasingly exposed to the list price of their prescriptions. See Half-Off Sale! Five Major Drugmakers Reveal Vast Gross-to-Net Price Gaps—and Why Rebate Reform Is Still Needed.

One option for addressing problems with the rebate system is to provide formulary rebates directly to patients at the pharmacy point of sale (POS), a.k.a. POS rebates. Such programs are most appropriate when a patient is filling a prescription during the deductible phase or when paying a coinsurance.

With POS rebates, a patient taking a highly rebated drug would pay less at the pharmacy for a prescription. What’s more, the patient’s health plan would be unable to hoard the rebate per the example in How Health Plans Profit—and Patients Lose—From Highly-Rebated Brand-Name Drugs.

Note that POS rebates do not necessarily disrupt the existing pharmacy distribution and reimbursement system. The only significant difference is that a portion of the rebate flows to patients rather than to plan sponsors. Therefore, POS rebates differ from the now-withdrawn Department of Health and Human Services (HHS) rule that proposed removing rebates from federal programs.

The proportion of commercial rebates and other manufacturer payments that plan sponsors receive has increased, because PBMs pass through the majority of these funds. See Employers Are Absorbing Even More Manufacturer Rebates from Their PBMs. Many employers are getting 100% of the rebates negotiated between PBMs and manufacturers.

The NBGH survey asked employers whether they are sharing PBM rebates with patients at the pharmacy. The chart below summarizes the somewhat encouraging responses. 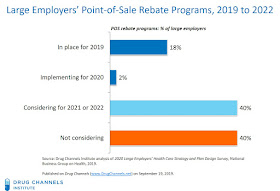 As you can see, about one in five employers uses a POS rebate to offset their beneficiaries out-of-pocket spending. However, a further 40% are “considering” POS rebates for 2021 or 2022. The remaining 40% of employers presumably prefer to hoard rebate dollars for other corporate purposes.

What’s more, two-thirds of the companies claim that they want “an alternative model based on net price of medications with no rebates.”

My Wall Street Journal op-ed explains that plans can choose not to use rebates to lower the out-of-pocket costs for the patient whose prescription generated the rebates. The NBGH echoed my observations, writing:


“By passing the rebate directly to the consumer at the POS, employers are able to share the incentive with the employee actually using the rebated medication, instead of applying those dollars to lower overall premiums.“

Some PBMs can and do offer a POS option, though adoption appears to be very low. No PBM has disclosed what portion of total rebates are being passed on to beneficiaries instead of being retained by the PBM or its plan sponsor clients.

For more on POS rebates, see Section 12.4.2. of our 2019 Economic Report on U.S. Pharmacies and Pharmacy Benefit Managers.

Rebate reform doesn't have to be an all-of-nothing proposition.

Plans could start small. I believe that employers should immediately start using POS rebates for the insulin category.

Insulin is an essential medicine that is sold to insurers and PBMs at deep discounts. However, too many patients are forced to make out-of-pocket payments based on insulin’s irrelevant list price. Rebates on insulin are a disproportionate contributor to the gross-to-net bubble.


The chart below is on page 16 of Eli Lilly and Company: 2018 Integrated Summary Report. 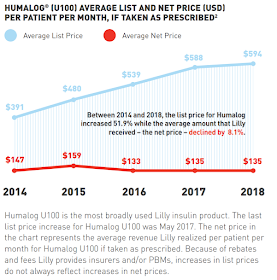 Congress can do its part by mandating rebate pass-through for insulin in Medicare Part D. Such a change would have a limited impact on premiums, while lowering overall Medicare spending through better adherence to therapy.

POS rebates are not a cure-all. Many problems with the rebate system would remain. Reimbursement and fees received by channel intermediaries—wholesalers, pharmacies, and PBMs—for a brand-name prescription would remain linked to a drug’s list price, not its net post-rebate price. Plans could choose to pass through only a small portion of the rebate, which may not offset enough of the patients’ out-of-pocket costs or change the plans’ incentives.

Despite these shortcomings, POS rebates are a workable solution to the warped incentives and distortions of the U.S. drug channel. Will commercial and government payers adopt this sensible solution for one of our country's most troubled categories?