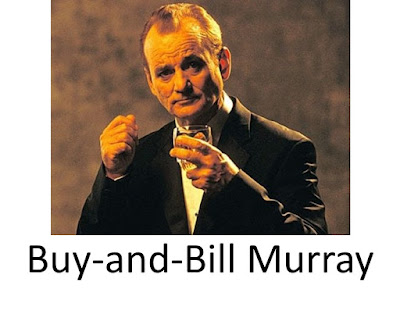 This year’s report provides the latest details about the ongoing disruption of the buy-and-bill market in Medicare Part B. As you will see below:
What's more, Part B spending has grown much faster than drug prices. The prices paid by Medicare for the top 10 Part B drugs have been growing at low- to mid-single digit rates. Spending has grown due to more beneficiaries and the adoption of newer, higher-priced therapies.

The Trump administration has signaled that it wants Medicare to pay less for Part B drugs. Its primary proposals focus on comparisons to prices paid by other countries. These analyses conveniently overlook the lower drug prices that manufacturers provide to the Medicaid program and 340B hospitals.

It looks like 2020 will not be relaxing times for the buy-and-bill channel.


Drug Channels Institute will host an exclusive live webinar, Drug Channels Outlook: What You Need to Watch in 2020, on Friday, December 13, 2019, from 12 p.m. to 1:00 p.m. ET. Get ready for what will certainly be another year of change for U.S. healthcare. CLICK HERE TO LEARN MORE AND SIGN UP.

In the buy-and-bill process, a healthcare provider purchases, stores, and then administers the product to a patient. After the patient receives the drug and any other medical care, the provider submits a claim for reimbursement to a third-party payer. The process is called buy-and-bill because the medical claim is submitted (billed) after the provider purchases (buys) and administers the drug.

For a deep dive into the current and future economics of the buy-and-bill market, see Chapters 3 and 6 of our new 2019–20 Economic Report on Pharmaceutical Wholesalers and Specialty Distributors. 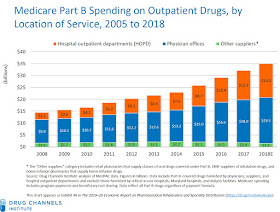 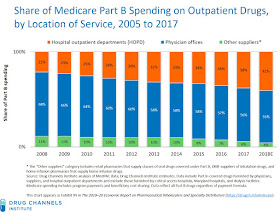 The shift in sites of care has occurred primarily because hospital and health systems have been acquiring physician practices. We delve into vertical integration by hospitals in Section 6.3.1. of our wholesaler economic report .

For instance, the share of oncology practices owned by hospitals and health systems has grown substantially over the past 10 years, from 20% of practices in 2007 to 54% in 2017. (source) Consequently, the MedPAC data show that hospital outpatient departments accounted for 50% or more of spending on three oncology drugs: Rituxan, Neulasta, and Herceptin.

Note that Part B spending at physician offices has grown over the past 10 years, despite the loss of relative position. At least they have that going for them, which is nice.

NO ONE WILL EVER BELIEVE YOU

Prices have been growing more slowly. MedPAC provided data on the change in Average Sales Price (ASP) for the 10 provider-administered drugs with the highest spending in 2017. Below we show the results for the past 10 years and the most recent period (2018-2019). These 10 drugs accounted for 43% of Part B spending in 2017. 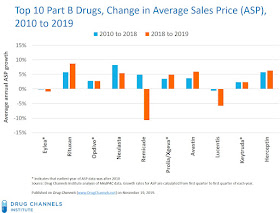 As you can see, price increases have been relatively modest, and below total spending growth. The sales-weighted increase in ASP from 2018 to 2019 was only 1.8%. Notably, Remicade’s ASP has declined, due to competition from the biosimilar versions of the drug. See We Shouldn’t Give Up on Biosimilars—And Here Are the Data to Prove it

Despite modest ASP growth for many drugs, the MedPAC data show that the average payment per Part B beneficiary grew by 6.9% per year from 2009 to 2016. Part B spending has grown due to a combination of: 1) more Part B beneficiaries, 2) the use of newer, higher-priced drugs, and 3) price increases on existing drugs. MedPAC did not distinguish the relative contributions of price increases for existing drugs from the impact of higher prices for new drugs.

The spending and pricing figures ignore the impact of the 340B Drug Pricing Program. Medicare pays hospitals the full rate based on ASP, even when the hospital profits from the spread between a steeply discounted 340B price and the ASP. See New OIG Report Shows Hospitals’ Huge 340B Profits from Medicare-Paid Cancer Drugs.