Happy Thanksgiving, everyone! Before you stretch your stomach, stretch your mind with some food for thought. In this issue:
Plus, a timely new campaign from the FDA.


Chrissy Farr at CNBC is the reporter who has been most closely following Amazon. As she astutely observes, Amazon has recently changed its branding “PillPack, an Amazon company” to “PillPack by Amazon Pharmacy.” The company has also filed state licenses to put the “Amazon Pharmacy” name on its pharmacy fulfillment centers.

Amazon clearly wants to become a significant player in the $425 billion pharmacy industry. I still believe that it will take multiple years of dramatic growth for Amazon to alter the market. Unless Amazon makes a large acquisition, its overall market share will likely remain in the low single digits for at least the next five years. If Amazon builds a $10+ billion pharmacy business, then it will be among the largest pharmacies in the U.S.
Reasonable Assumptions in Manufacturer Reporting of AMPs and Best Prices, Office of Inspector General (OIG) of the U.S. Department of Health and Human Services


In July, I highlighted a major computational error that had appeared in a paper from The Journal of the American Medical Association (JAMA). See JAMA: Withdraw This Flawed and Inaccurate Article About the 340B Program and Drug Prices. I explained that the authors failed to account for PBM rebates in their computation of Medicaid best price. They therefore did not correctly compute the 340B ceiling price.

The journal chose to keep the paper in publication. It posted my concerns on its website, along with a rebuttal from the paper’s authors, Sean Dickson and Ian Reynolds. In their rebuttal, Dickson and Reynolds reiterated their personal belief that commercial rebates to PBMs are excluded from the computation of best price in Medicaid.

However, this new September 2019 OIG report confirms that the authors’ plain-language interpretation of the statutory language is at odds with industry practice. On page 19, the OIG wrote: “…most manufacturers reported that to be conservative, they assumed that all PBM rebates reduce retail/provider prices, and thus they include them when calculating BP.”

In other words, the OIG study confirms my critique, which was based on industry practices.

I still believe JAMA should withdraw this deeply flawed paper from publication, because the authors’ calculations are inaccurate and their conclusions are erroneous. Alas, that probably won’t happen. In our post-truth era, believing is seeing—even in peer-reviewed journals.
Form 10-Q for 9/30/19, Diplomat Pharmacy


In my August news roundup, I highlighted the sad tale of Diplomat Pharmacy.

Now, things have gone from bad to worse. The company recently announced the loss of an unnamed third-party payer contract. Diplomat also issued a dire warning about its “ability to continue as a going concern."

Diplomat’s stock has fallen below $4 per share, down more than 90% from its July 2015 peak. (See sad chart below.) It’s never a good sign when your stock price get close to the price of a McDonald’s Happy Meal. Who will buy this melting ice cube before there's nothing left? 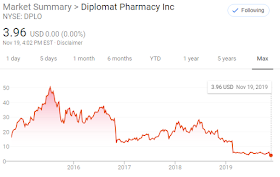 For more on the state of specialty pharmacy, see The Shakeout Begins: The Fastest-Growing, Private Specialty Pharmacies of 2018.
Annual Spending per Patient and Quality in Hospital-Owned Versus Physician-Owned Organizations: an Observational Study, The Journal of General Internal Medicine


No surprises here: Financial integration between physicians and hospitals raises spending, but not quality. Further evidence that vertical integration of providers leads to higher prices, but not necessarily better care.

FDA Launches Food Awareness Month To Get Americans Interested In Eating, The Onion


The Onion, America’s Finest News Source, provides a helpful update on this exciting new initiative from the Food and Drug Administration.

Just in time for Thanksgiving dinner, it builds upon the groundbreaking nutrition research I highlighted in last month’s news roundup: Nutritionists Report They Wouldn’t Have To Figure Out Which Foods Were Bad For You If Americans Just Ate Normal For Once.
Adam J. Fein, Ph.D. on Thursday, November 21, 2019