For retail clinics, is it the best of times or the worst of times?

Walgreens  retail clinic business has been floundering. Last week, Walgreens announced that it would shut the last of its in-house retail clinics and in favor of outsourcing clinic operations to hospitals and health systems.

Other retailers are investing in more expansive healthcare services to realize the promise of store-based healthcare. That’s one reason why CVS Health is rolling out its HealthHUBs, while Walmart is phasing out its traditional retail clinics in favor of a more comprehensive Walmart Health offering.

Below, I review the retail clinic market in 2019. Many large retail chains operate clinics, but their strategies and growth rates differ. I expect the traditional retail clinic model to fade in favor of locations with broader healthcare services. This new direction will put pharmacies in more direct competition with urgent care clinics and primary care providers.

Pay close attention to how CVS Health leverages its Aetna business to manage site-of-care costs. Investors, payers, and patients will soon determine whether this has been the age of wisdom or the age of foolishness.

Portions of today’s post have been adapted from Section 1.4.1. of our 2019 Economic Report on U.S. Pharmacies and Pharmacy Benefit Managers.

SECTION THE FIRST: RECALLED TO STORES

In-store clinics had been hyped as the next big thing to disrupt healthcare. They once seemed poised to become a crucial adjunct of the retail pharmacy business. However, growth in the number of clinics has stagnated. Clinic revenues remain a very small share of pharmacy chains’ prescription revenues.

The table below summarizes the retail clinic market as of January 2019. Our research has found fewer than 2,000 retail clinics. The total number of retail clinics has declined from its peak, in 2015. 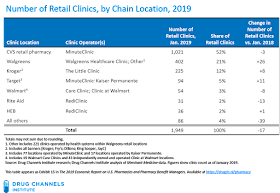 SECTION THE SECOND: THE GOLDEN THREAD

The early promise of retail clinics has given way to today’s disappointing reality.

Payers are only reluctantly supporting retail clinics. Health plans have added retail clinics to their provider networks, allowing patients to use third-party insurance for clinic services. For 2019, 77% of large employers covered services provided in retail clinics, compared with 47% in 2010. However, few employers provide financial incentives for employees to visit these clinics. (source)

Meanwhile, health systems are rapidly opening urgent care clinics that can compete with retail-based clinics. The Urgent Care Association (UCA) has estimated that in 2017, hospitals and other providers operated about 7,700 urgent care clinics. Urgent care clinics have a reputation for having better-qualified medical staff, whereas patients have concerns about the qualifications and expertise of retail clinics’ staff. (source)

The urgent care market has quickly become crowded with both independent and hospital/IDN operators. Consumers have many with options from providers they know.

SECTION THE THIRD: THE TRACK OF THE SYNERGY

CVS Health sees an opportunity to compete directly with legacy providers and emerging urgent care centers. CVS Health CEO Larry Merlo hinted at the coming battle when he outlined a key benefit of its HealthHUBs:


“Our plan design innovations aim to incentivize members to utilize more cost-effective settings and providing our pharmacies with integrated medical when pharmacy data allows for improving the delivery of a member’s next best health action to impact behavior changes and improved health outcomes.”

CVS has generated significant synergies by owning a PBM along with a variety of dispensing channels. It looks poised to use Aetna to run a similar same play with healthcare services. Site-of-care management may turn out to be the key to the CVS Health-Aetna merger.

So, will this be a far, far better thing that it has ever done?