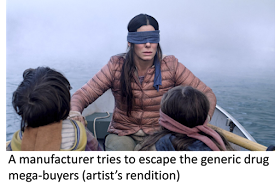 Below, we update our analysis of these generic drug mega-buyers.

We estimate that for 2018, the three largest buyers  accounted for more than 90% of total U.S. generic drug purchases from manufacturers. In 2019, acquisitions and contract switches will shift market share among these groups, but not diminish their impact. It's no surprise that manufacturers lose their minds when seeing these monster firms.

There are now fewer therapeutic areas with excess inflation, so future price reductions will be smaller. What’s more, some generic manufacturers have signaled their intention to exit highly competitive generic drug categories in which prices have dropped. Look for oral generic prices to stabilize—and possibly rise—over the next 12 to 18 months. Perhaps the blindfolds will come off?

P.S. Portions of this post have been adapted from our forthcoming 2019 Economic Report on U.S. Pharmacies and Pharmacy Benefit Managers. We'll be taking this updated and expanded edition out of our bird box on March 5!

Here is our summary of the generic power buyers for 2018. Note that no organization reports its generic volume, so the figures in this exhibit represent our estimates. (The birds in our box can detect these scary mega buyers.) 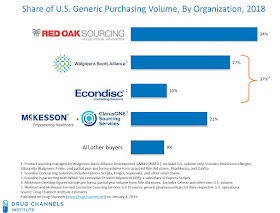 Here are profiles of these entities and recent news that will shift market shares in 2019:


We estimate that in 2018, Red Oak remained the largest buyer of generic drugs.

The company was formed in 2013 as a 50/50 joint venture between CVS Health and Cardinal Health. It began operating in mid-2014 as Red Oak Sourcing, LLC. The joint venture does not require extensive business integration or acquisition expenses, nor does it fundamentally change each company’s current supply chain and distribution operations.


Walgreens Boots Alliance Development (WBAD), a Swiss joint venture, is the second-largest buyer of generics drugs. It is poised to become larger than Red Oak, given recent acquisitions and alliances.

WBAD was formed in 2012, after the first stage of the merger between Walgreens and Alliance Boots. Walgreens’ supply agreement with AmerisourceBergen (ABC) allows the wholesaler to source generic drugs and other products through WBAD. ABC therefore shares in (and contributes to) the purchasing scale of WBAD. AmerisourceBergen’s pharmacy customers, such as the ones that participate in the wholesaler’s PRxO generics program, also benefit from the reduced acquisition costs if ABC shares the savings with them.

WBAD continues to expand its share of generic purchases, due largely to the addition of volume from recent acquisitions and business shifts:

In 2017, Express Scripts agreed to partner with WBAD to purchase generic drugs. Express Scripts is participating via Innovative Product Alignment (IPA), a newly created subsidiary that will gain some price transparency into—and be able to audit—WBAD. Express Scripts will not shut down Econdisc, and AmerisourceBergen will reportedly not gain additional volume from the arrangement. Econdisc is therefore a separate entity in the chart above. We estimate that the full impact of this arrangement will be felt in the 2019 contracting cycle.

In 2018, Walgreens and Express Scripts formed ValoremRx Specialty Solutions, a separate group purchasing organization focused on the procurement of specialty brand drugs. ValoremRx does not focus on generic drugs, so we have not incorporated its activities into the chart above. We estimate that ValoremRx has had minimal market impact.


Unlike its wholesaler peers, McKesson has channeled its customers’ generic purchasing volume into OneStop Generics, its own generic program. This program has added leverage and scale to McKesson’s negotiations with generic manufacturers. OneStop, however, has suffered due to a loss of volume from Rite Aid and the shift of Ahold’s business to Cardinal Health.

In 2016, Walmart and McKesson formed ClarusOne Sourcing Services LLP to source generic pharmaceuticals for their respective U.S. operations. McKesson is Walmart’s longtime brand-name drug supplier. ClarusOne is fully operational and has been negotiating with manufacturers.


Other significant buyers are not broken out in the chart above. These include:
The purchasing scale associated with the large consortia have shifted large pharmacies’ generic purchasing from direct sales to wholesalers. Generic volume purchased via wholesalers is included in the market share figures above.

The consortia have contributed to a massive and sustained period of generic price deflation. The chart below shows price changes for a sales-weighted index of mature oral and injectable generic drugs. The data come from the independent research firm Nephron Research. IMHO, Nephron provides Wall Street’s most robust methodology for tracking generic market drug prices from manufacturers to purchasers.

As the blue line shows, deflation in oral solid generic pills, where consortia have the greatest impact, was -10% to -15% throughout 2017 and 2018. By contrast, prices for injectable drugs rose in the low single digits during 2018. 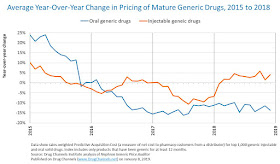 That said, generic manufacturers seem to be reacting to these trends. Some generic manufacturers have signaled their intention to exit highly competitive generic drug categories in which prices have dropped. For instance, RBC Capital Markets found that the number of abbreviated new drug applications (ANDAs) that have been withdrawn spiked in 2018, from 21 withdrawals per month in 2017 to 71 withdrawals per month in the first half of 2018. These withdrawals may indicate that manufacturers are reevaluating the profitability of entering highly competitive categories.