This week, I’m rerunning some popular posts during the holiday week. Click here to see the original post and comments from February 2019.

Especially notable was a letter to the editor from American Health Insurance Plans (AHIP). It claims that “the savings that insurance providers negotiate are returned directly to consumers through lower premiums and out-of-pocket costs."

Don’t believe this misleading half-truth. It distorts the primary argument of my WSJ op-ed: Patients often pay full price for drugs that are sold to insurers at deep discounts.

Below, to show you why, I follow the dollar for an expensive, highly rebated brand-name drug used by a consumer with a high-deductible health plan. As you will see, the consumer pays more than twice the true discounted price of the drug. Meanwhile, the health plan pockets a large rebate.

That's the uncomfortable reality of the gross-to-net bubble that AHIP wants to hide. Insurers may not use rebates to lower the out-of-pocket costs for the patient whose prescription generated the rebate. And at the same time, AHIP indignantly blames "the prices drugmakers set." We all deserve better.

Consider a prescription with the following characteristics:
The table below traces the computations that determine the flow of funds between the manufacturer of a brand-name drug and the third-party payer. It is adapted from Section 9.3. of our forthcoming 2019 Economic Report on U.S. Pharmacies and Pharmacy Benefit Managers. The sources for the specific figures are contained within the full report. 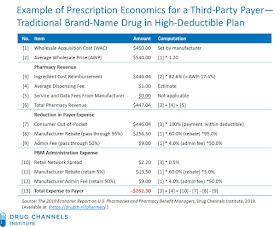 The example above is illustrative, but it captures an essential aspect of today’s crazy drug channel.

That's what AHIP is trying to hide—and why insurers are already gearing up to oppose any reform of today’s broken rebate system. Its insurer members are addicted to the rebate dollars, which can be used to compete for business through lower premiums.

Yes, you read that right.

Using the example above, OptumRx still wants to collect a rebate of $270—even if the manufacturer cuts the list price by 50%, to $225. Such demands make it essentially impossible for manufacturers to reduce prices.

The key issue remains: Patients are the ultimate victims of our current drug pricing system.