Below, I update our estimates on pharmacy economics and margins. Our analysis reveals that independent pharmacy owners have faced another year of deteriorating finances.

What's more, we estimate that in 2017, the average pharmacy owner’s salary fell to a level comparable to that of an employed pharmacist. Owning a pharmacy, with all of its hassles and additional obligations, now brings the same reward as being an employee. I wonder how many owners will conclude that it’s barely worth the risk and effort.

Read on for our look at pharmacy profits and some comments on the industry’s competitive dynamics, including the financial impact of direct and indirect remuneration (DIR) fees.

The pharmacy consolidation endgame is getting closer. The next time you see a pharmacy owner, offer your condolences.

The 2018 NCPA Digest, Sponsored by Cardinal Health publishes summary 2017 financial and operating data submitted by pharmacy owners. These data have strengths and weaknesses. They do, however, provide the only publicly available, consistently published look at the financial position of independent pharmacies.

NCPA collects more detailed financials, but it doesn’t share those data. Apparently, NCPA has a self-imposed gag clause to prevent external analysts from examining pharmacy-owner economics. Since I don't have access to the complete financial report, some of the figures below are our estimates. If there is better news, NCPA has not revealed it.

Here are some basic definitions to clarify the pharmacy profit story:

Gross profit equals a pharmacy’s revenues minus the cost of products (net of discounts and returns) bought from a manufacturer or a wholesaler. Gross margin expresses gross profit as a percentage of revenues.

Gross profit measures the portion of revenues available for operating expenses and operating profit. Operating expenses include: (1) payroll expenses—the wages, taxes, and benefits paid to the pharmacy’s staff, including the business owners, and (2) general business expenses—everything else needed to run the pharmacy, such as rent, utilities, licenses fees, insurance, advertising, and other business costs.

Owner's discretionary profit (ODP) equals the sum of the owner’s compensation and the pharmacy’s operating income. Thus, ODP encompasses two of the three ways a pharmacy can spend its gross profit dollars. The NCPA Digest used to publicly report the ODP, but it has hidden the figure since 2013.

For more on pharmacy and prescription economics, see our annual Economic Report on U.S. Pharmacies and Pharmacy Benefit Managers.

OBSERVATIONS ON THE 2017 DATA

This year’s findings differ from U.S. government statistics, which show higher overall gross margins at chain and independent drugstores. In 2016 (the most recent year for which data are available), the drugstore industry’s overall average gross margin, as reported by the U.S. Census Bureau, was 26.1%. (source) The industry margin is higher than the independent pharmacy margin because non-prescription front-end products with higher-gross margins account for a greater share of sales at chain drugstores. 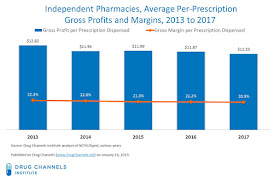 3) Independent pharmacies’ generic dispensing rates have caught up to those of the overall market.


In recent years, the NCPA digest has recorded an odd discrepancy. For independent pharmacies, the generic dispensing rate (GDR)—the percentage of prescriptions dispensed with a generic drug instead of a branded drug—lagged that of the overall market from 2012 to 2015.

For 2017, the gap essentially vanished. The GDR for unbranded generics in the overall market was 85.2% in 2016. The GDR for independent pharmacies was 85%.

4) The average pharmacist owning a single pharmacy earned about $136,000 in 2017—down for the fourth consecutive year.


In this year’s sample, average annual prescription volume per pharmacy dropped by 1.0%, to 59,137 prescriptions, in 2017. Combined with the slight decline in gross margin, this resulted in lower compensation for a pharmacy owner.

We estimate that the owner’s discretionary profit (ODP) dropped for the fourth straight year. On a per-pharmacy basis, we estimate that ODP shrank, from $200K in 2015 to $136K in 2017.

For 2017, total non-owner payroll expenses dropped, too. This means that the hit to owners’ earnings came from lower revenues and gross profits in the NCPA sample. The salary gap between a pharmacy owner and an employed pharmacist has almost vanished. For 2017, the average gross base salary for a pharmacist at a retail, mail, long-term care, and specialty pharmacy reached nearly $122,000. See Pharmacist Salaries Keep Rising: Hospitals Continue to Lead in Wage and Employment Growth.

5) By the NCPA's count, the total number of independent pharmacies is slowly declining.


According to the NCPA’s counting, the total number of independent community pharmacies is declining, by an average of -1% per year. However, IQVIA data still show much more stability in overall independent pharmacy numbers. I can’t figure out the discrepancy. 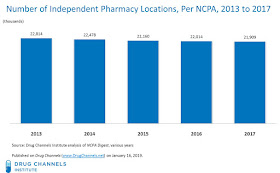 Independent pharmacies are facing multiple challenges, including slow prescription growth, a plateau in the generic dispensing rate, payers’ use of narrow networks, direct and indirect remuneration (DIR) fees, and intense competition for consumers. Hypercompetition is forcing pharmacies to reduce their prescription profit margins.

Retail pharmacies dispense primarily mature generic drugs with low prices and low gross profits. As we showed last week, the prices of oral solid generic drugs remain in a deflationary cycle. Consequently, retail pharmacies that focus on traditional drugs account for a majority of the industry’s dispensed prescriptions but a decreasing share of the industry’s revenues.

The NCPA survey data also reflect the financial implication of DIR in the Medicare Part D program. As we show in CMS Considers Point-of-Sale Pharmacy DIR: Another Prelude to a World Without Rebates?, the net value of pharmacy DIR paid to Part D plans totaled $4 billion in 2017. Pharmacy DIR fees therefore amounted to about $63,000 per retail pharmacy location. For the average independent pharmacy in the NCPA sample, that’s about 2% of a pharmacy location’s revenue and about 8% of its total gross profit.

Before the Internet era, small retailers had already vanished from most industries and been replaced by national chains. (See my comments on other retail industries that I describe in Shopping for Prescriptions: How Deductibles Will Reshape the Pharmacy Industry.)

Consistent with my comments in last year’s analysis: Pharmacy owners should not be surprised if their industry's fundamental competitive economics continue to get worse.