PBM Pricing Overhaul: Express Scripts Prepares for a World Without Rebates—But Employers May Not Change 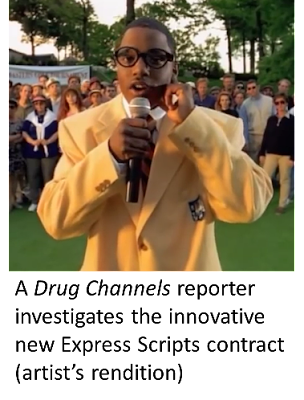 You should pay close attention to this b.i.g. news. It is structured so that Express Scripts will not profit from the flow of funds from a brand-name manufacturer to a plan sponsor. What’s more, the PBM’s compensation will be fully delinked from drug list prices. Instead, Express Scripts will earn only fixed management fees plus additional at-risk compensation tied to clinical outcomes.

I spoke to Express Scripts and the NDPC’s consultant to clarify how the new model will differ from more conventional structures. As I see it, this PBM compensation approach could be an important step in our industry’s journey toward a world without rebates.

For now, it only applies to a sliver of Express Scripts’ revenues. But if the new pricing model is widely adopted, Express Scripts (Cigna) will be able to escape drug channel disruption unscathed.

The biggest unknown is how employers will behave as they select pharmacy benefits. Will the funds flowing transparently through the PBM be put toward solving the reverse insurance issue the gross-to-net bubble? Will this lower out-of-pocket costs for patients? As they say: Mo money, mo problems.

For context, the chart below summarizes how a plan sponsor has typically compensated its PBM for plan administration and other services. 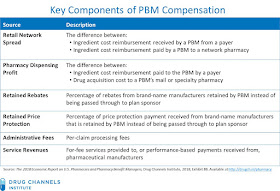 As you can see, plan sponsors use a variety of approaches to compensate a PBM for plan administration and other services. In general, spread pricing models emphasize retail network spread, dispensing profit, and rebate retention. Pass-through models emphasize administrative fees and service revenues. Every contract with a PBM is customized to the requirements of the plan sponsor and could include a mix of methods.

For more background, see Section 5.5. of The 2018 Economic Report on U.S. Pharmacies and Pharmacy Benefit Managers.

The new arrangement is between Express Scripts and the National Drug Purchasing Coalition (NDPC), a loose affiliation of employers. NDPC is not a legal entity and doesn’t have a website. (Weird, I know.) Its membership includes PepsiCo, ExxonMobil, Chevron Corporation, Sodexo, Yum! Brands, Solvay USA, and 12 unnamed other larger corporations. Each NDPC member has its own separate contract with Express Scripts.

NDPC’s PBM relationship began with Medco in 1996. NDPC worked with Cambridge Advisory Group, an outside consultant to advise on the new Express Scripts contract.


This new compensation approach does seem to meet the tenets set out in the press release: Accountability, Transparency, and Alignment. Here’s what I learned:

NDPC’s long history with Express Scripts and Medco enabled the unusual level of trust and information sharing required for this innovative arrangement. However, I wonder if Express Scripts would have pursued this arrangement in the absence of the Cigna transaction.

Express Scripts and its peers are starting to disrupt the conventional PBM business model. In this new model, all rebates and other manufacturer monies are flowing back to plan sponsors.

Will the funds be used primarily to offset total plan costs for the employer and premiums for everyone? Or, will the money offset the out-of-pocket costs incurred by the patients whose prescription activity generates the rebates and fees?

These questions highlight the most difficult challenge of shifting to a world without rebates, per my discussion in New Disclosures Show CVS and Express Scripts Can Survive in a World Without Rebates. Are Plan Sponsors Now the Real Barrier to Disruption?.

Perhaps plan sponsors still don't know what we want from them. It's like the more money we come across, the more problems we see.

The Notorious B.I.G. and Puff Daddy provided an NSFW examination of the gross-to-net bubble. Messrs B.I.G. and Daddy may not be to everybody’s liking, but in this case, they do call all the shots. Click here if you can’t see the video.