Updated Part B Data: Hospitals Are Displacing Physician Offices Even Faster Than We Thought 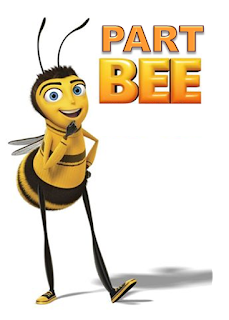 This year’s report provides new and revised details about the locations where Part B buy-and-bill spending occurs. As you will see below, physician offices account for a smaller share of spending than what we previously reported. Hospital outpatient departments account for a higher share. What’s more, the new MedPAC data show that the shift to hospitals is happening even faster for oncology products.

For years, I have been buzzing about the growing role of hospital outpatient departments in the buy-and-bill market. I’m afraid that these data will sting those hoping for a physician office rebound.

In previous reports, MedPAC had presented a combined figure for physician offices and other suppliers. This year’s edition isolates spending at physician practices from spending at other suppliers. The “Other suppliers” category comprises retail pharmacies that supply classes of oral drugs covered under Part B, DME suppliers of inhalation drugs, and home infusion pharmacies that supply home infusion drugs. The entire data series from 2005 to 2016 has also been restated. 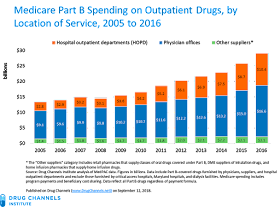 What’s more, the annual growth rate for Part B payments to hospital outpatient sites has been higher in every year from 2009 to 2016. From 2009 to 2016, the compound average growth rate (CAGR) of spending was 7.2% per year for physician offices, compared with 16.4% for hospital outpatient departments. Note that spending at physician offices has grown significantly over the past 10 years, despite the loss of relative position.

To visualize the shift, the chart below presents these data as the share of spending. For 2016, physician offices accounted for 57% of Part B spending. However, hospital outpatients’ share of Part B spending has grown, from 21% in 2005 to 36% in 2016. The share at physician offices is lower than figures shown in previous reports, due to the change in Medicare reporting. The share via other suppliers has declined consistently since 2009. 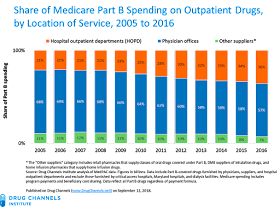 MedPAC also provided data on location of service for 10 high-expenditure drugs. Unfortunately, these data do not separate physician offices from other suppliers.

The chart below shows Part B spending by site of care for six drugs. The chart also includes Part B’s market share of total spending, including commercial and private payers. The share data come from this 2017 GAO report.

As you can see, there are important variations in this site-of-care division compared with the overall share figures in the second chart above. 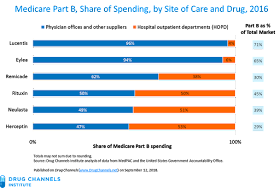 The shift in sites of care has occurred primarily because hospital and health systems have been acquiring oncology and other practices. We will update our analyses of the factors motivating vertical integration activity in our forthcoming 2018–19 Economic Report on Pharmaceutical Wholesalers and Specialty Distributors. The new report will be available on October 9 and is now available for preorder.

MedPAC hasn’t studied how the shift in site of care is affecting Medicare beneficiaries. But it’s clear that changes in the buy-and-bill market are not just in the eye of the beeholder.