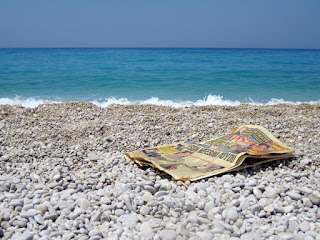 We’re wrapping up one of newsiest summers in recent memory. As you send the kids back to school, savor this curated collection of curiosities, combed from the now-empty Drug Channels beach:

In this issue:
Plus, an unexpectedly straightforward PBM news story that is clear enough to watch with your kids.

P.S. Join the more than 6,200 people who follow my daily musings and neat links at @DrugChannels on Twitter.


I have been closely following the Columbus Dispatch muckraking on pharmacy benefit manager (PBM) practices in Ohio’s managed Medicaid program. See the paper’s Side Effects webpage.

ICYMI, these stories have led to dramatic revelations about the PBMs of CVS Health and Optum. Ohio’s Medicaid program announced that it would renegotiate contracts so that PBMs could no longer be compensated with spread pricing. FYI: Under spread pricing, the Ohio Medicaid program compensates PBMs by permitting them to retain differences, or spreads, between (a) the amount that a PBM charges to the Medicaid program, and (b) the reimbursement amount that the PBM paid to the pharmacy that dispensed a prescription to a Medicaid beneficiary.

The Dispatch’s investigations triggered the state audit linked above. This report offers unique insight into how these PBMs make money in managed Medicaid. It’s required reading for everyone interested in channel economics.

Below is a key finding from the audit. As you can see, PBMs earned average spreads of $5.71 per prescription. The report also found that spreads can sometimes be negative. (See page 22 of the report.) Generic drugs accounted for 86% of scripts and 93% of spread. 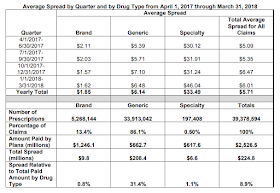 Add the Ohio brouhaha to the many pressures on PBMs traditional sources of profit.

BTW, some pharmacy owners apparently believe that pass-through pricing will somehow magically increase the amounts that they are paid. Just because PBMs make less doesn’t mean that pharmacies will make more.

In May, AHIP released a highly misleading study that omitted rebates from the computation of prescription drug costs. Click here to read my comments about fake news from AHIP. AHIP also misrepresented Milliman’s role in the analysis.

In July, AHIP released a study about rebates in the Medicare Part D program. This study was actually conducted by Milliman, which used confidential rebate data provided by health plans.

Milliman found that manufacturers' Part D rebates in 2016 averaged 30% off list price. These rebates varied somewhat predictably with the degree to which an individual drug faced competition in its therapeutic class. Here’s an important chart from the study: 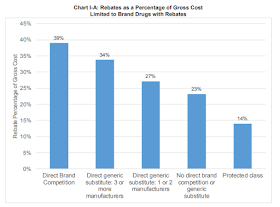 The full report draws some questionable conclusions about drug prices and rebates. I’m still not certain that we can trust any study funded by AHIP, so use these data with caution.

Letters to 340B Contract Pharmacies , Committee on Energy and Commerce, U.S. House of Representatives


Last month, I explored the latest revelations from the U.S. Government Accountability Office (GAO) about contract pharmacies in the 340B Drug Pricing Program. See GAO Confirms It: 340B Hospitals and Contract Pharmacies Profit from Low-Income, Uninsured Patients.

The letters ask for extensive information about contract pharmacy operations and profits. I have no idea if the responses will be made public. Regardless, the new request signals that 340B contract pharmacy profits could shrink in the future.


In last month’s news roundup, I highlighted an interview with Chris Holt, Amazon’s leader for global healthcare, about the med-surg business. This month, Chris provides insight into Amazon’s business with dental practices along with some comments on the healthcare supply chain. As I learned, it’s all about “Mary the Millennial.”


Here’s a surprisingly balanced PBS NewsHour story on pharmacies, PBMs, and "so-called rebates." (LOL) One quibble: Rebates are billions of dollars, not millions (as the reporter says).