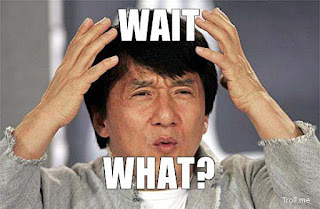 Last week, Express Scripts released the 2019 updates to its formulary exclusion lists. They are available below for your downloading pleasure. Unfortunately, CVS Health won’t release its list until October.

For 2019, Express Scripts was more aggressive than ever, expanding its list to more than 240 excluded products. For the first time, it excluded products in two specialty categories: HIV antiretrovirals and Factor VIII recombinant products. It also added a new exclusion in multiple sclerosis.

Oddly, Express Scripts has made a patient unfriendly change to the hepatitis C category. It has excluded AbbVie’s Mavyret, the market share leader with a low list price. Instead, it added Merck’s Zepatier, whose list price was recently cut but can’t treat all types of hepatitis C. Consequently, the 2019 preferred formulary will force at least one in four patients to use the products with high list prices and high rebates. Many patients will end up incurring much higher out-of-pocket costs. Incredibly, Express Scripts advocates copay cards as a fix!

To me, the hepatitis C formulary change are further evidence of the warped incentives of our gross-to-net bubble. Payers benefit from a low net price, and PBMs gain from high list prices with high rebates (though less than we once thought). Meanwhile, patients get stuck making out-of-pocket payments based on the higher list price. Is this any way to run a drug channel?

RUMBLE IN THE BRONX

Formulary exclusions block access to specific products. They emerged as a powerful tool for PBMs to gain additional negotiating leverage against manufacturers. PBMs force manufacturers of therapeutically comparable brand-name drugs to offer bigger rebates to avoid being cut from the formulary. The exclusions are a crucial factor behind the growing gross-to-net disparities for manufacturers of brand-name drugs. See Payer Power: Why Eli Lilly, Janssen, and Merck Deeply Discount Their Drug Prices.

Formulary restrictions affect a PBM’s recommended national formulary. These restrictions are suggestions, not mandates. Thus, a drug’s appearance on an exclusion list does not guarantee that all patients will lose access. However, plan sponsors—the PBM's clients—that do not adopt the standard formulary could face reduced rebates and/or higher plan costs.

Here are the relevant 2019 materials for Express Scripts:
For 2019, Express Scripts published only the changes to its preferred formulary. You can review its complete 2018 list of exclusions here: Express Scripts 2018 National Preferred Formulary Exclusions (as of 7/15/18)

In an unusual move, CVS Health this year did not release the 2019 changes to its exclusion list. The CVS Health list will reportedly be available in early October.

You can find my analysis of last year’s exclusion list announcements in this August 2017 Drug Channels post: What’s In, What’s Out: The New 2018 CVS Health and Express Scripts Formulary Exclusion Lists . For more on PBMs and formulary management, see Chapter 5 of our 2018 Economic Report on U.S. Pharmacies and Pharmacy Benefit Managers.


The chart below shows the number of drugs that have been excluded from the national preferred formularies of the two largest PBMs. 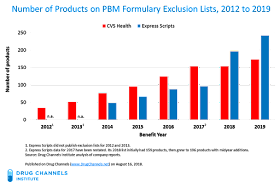 Express Scripts expanded its list to include 242 products for 2019. Its 2018 list initially had 159 products, then grew to 196 products with mid-year additions. For 2019, Express Scripts excluded a further 48 products and added back 2 products (Trulance and Zepatier).

Though CVS didn’t release its 2019 exclusion list, it did announce that it plans to remove 23 drugs from—and add back four drugs to—its 2019 Standard Control Formulary.
2. Express Scripts made exclusions in key specialty categories.


The PBMs have historically been reluctant to clamp down on crucial specialty drug categories. But for 2019, Express Scripts got slightly more aggressive with its exclusions in three specialty categories:

3. Express Scripts made a patient unfriendly change to the hepatitis C category.

Express Scripts made a major change to the hepatitis C category. It excluded AbbVie’s Mavyret product and added Merck’s Zepatier product back to its preferred formulary. The other preferred alternatives in this category are Epclusa, Harvoni, and Vosevi.

I’m not qualified to comment on the clinical reasoning behind this move. However, the list price dynamics are intriguing, and the patient impact is troubling.

Understanding the impact of these changes requires a brief detour into the medical treatment of chronic hepatitis C virus (HCV). Here’s some information from the American Liver Foundation (ALF):
In a press release announcing the 2019 formulary exclusions, Express Scripts stated: “After clinical considerations, formulary preference is given to high-value therapies with the lowest net cost for clients, achieved through low list price, rebate or both.”

Until recently, Mavyret had the lowest list price. AbbVie launched Mavyret in 2017 with a wholesale acquisition cost (WAC) list price for a one-month supply that was more than 50% lower than the list price of other therapies.

These drugs are not inexpensive. According to Pharmaceutical Technology: “The list prices for eight-week and 12-week courses of Mavyret are $26,400 and $39,600, respectively—far below the 12-week list prices for Harvoni ($94,500) and Epclusa ($74,760).” Rebates can be substantial, so the list prices do not meaningfully reflect the net cost to a payer.

Mavyret has rapidly gained share. The chart below shows the prescription market share for HCV products in 2018 to date. As you can see, Express Scripts has excluded the product with the largest market share (Mavyret) along with three products that collectively accounted for 0.4% of prescriptions. The preferred alternatives rank as the second through fifth most-dispensed therapies. 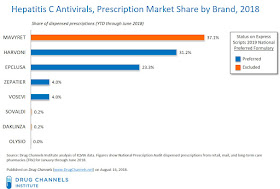 Mavyret’s position as the HCV drug with the lowest list price was disrupted last month when Merck cut Zepatier’s list price by 60% last month. Merck recorded no net sales (after rebates) from the product in the first quarter of 2018. See The New York Times coverage in Merck Is Lowering Drug Prices. There’s a Catch.

In its press release announcing the 2019 exclusions, Express Scripts stated that “…formulary preference is given to high-value therapies with the lowest net cost for clients, achieved through low list price, rebate or both.”

I asked Express Scripts about the HCV patients that will face higher out-of-pocket costs due to the exclusion of the market share leader with a low list price. Its spokesperson told me:


"[W]e would prefer to see drug makers lower list prices instead of funding copay card programs as that would make the medications more affordable for all patients and payers. But until they choose to do so, then the copay card would be an option."

Huh? Express Scripts is now encouraging patients to use manufacturer copay cards as a way to overcome its own formulary recommendation?

Of course, commercial plans could fix this mess by passing through the hepatitis C rebates to patients at the point of sale. Most plans don’t do that now, and I don’t expect them to do it voluntarily in 2019. As I noted in Tuesday’s analysis of PBM rebates, plan sponsors prefer to hoard rebates rather than sharing the savings with the employees whose prescriptions generated the rebate funds.

The question I am pondering: What kind of kung fu will defeat such list-to-net distortions? Perhaps A System Without Rebates: The Drug Channels Negotiated Discounts Model?