This week, I’m rerunning some popular posts while I attend Asembia’s 2018 Specialty Pharmacy Summit. Click here to see the original post and comments from March 2018. 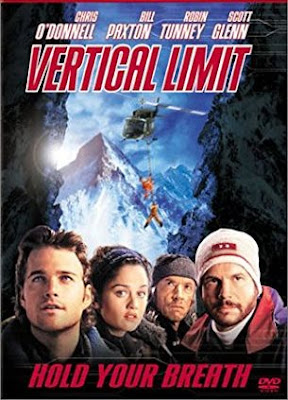 Wow. Yesterday, Cigna announced that it would acquire Express Scripts. See the links below.

Though Cigna was an unexpected acquirer, the deal confirms the importance of pharmacy and medical benefit integration. It also reinforces the role that pharmacy benefit management (PBM) plays in the drug channel. PBMs are now linked closely to the expensive specialty drugs that treat smaller patient populations, not to the primary care blockbusters of yesteryear.

The strategic logic, however, is much more compelling for Express Scripts than it is for Cigna. Perhaps that’s why the stocks reacted so differently yesterday. Express Scripts’ stock closed up 9%, while Cigna’s stock closed down 12%. Better to sell a PBM than buy one?

Below, I provide data about the PBM market, highlight vertical integration between PBMs and insurers, and discuss other industry implications.

Please feel free to leave your own $0.02 below. If you’re shy, you can comment anonymously.

As always, I encourage you to review the original source material for yourself. Here are links to the relevant materials:
TODAY’S PBM MARKET

The chart below shows national market shares for the largest PBMs in 2017. As you can see, about 72% of all equivalent prescription claims were processed by three PBMs: the Caremark business of CVS Health, Express Scripts, and the OptumRx business of UnitedHealth. These data appear in Section 5.2. of our new 2018 Economic Report on U.S. Pharmacies and Pharmacy Benefit Managers. 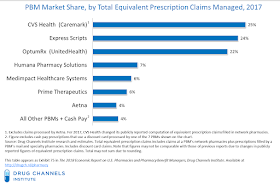 Note that Cigna does not appear in the chart above. That’s because its claims are included with the OptumRx figures. We estimate that the health insurer Cigna is OptumRx’s second-largest customer. This relationship was established between Cigna and Catamaran in 2013. Here is the current structure of this relationship:
On yesterday’s call announcing the deal, Cigna indicated that it has “significant structural flexibility” with the OptumRx relationship, suggesting that the new Cigna-Express Scripts may retain both platforms for its PBM activities.

The days of managing primary care blockbusters are almost over. Today, about 9 out of 10 prescriptions are for a generic drug.

Here’s a slide from The Outlook for Pharmacy Benefit Management: Evolution or Disruption?, my keynote address at the 2018 PBMI conference last Monday. It highlights how Express Scripts differs from its largest peers. 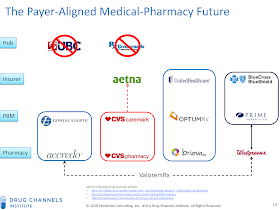 In The CVS-Aetna Deal: Five Industry and Drug Channel Implications, I wrote:


“If Caremark and Aetna combine their PBMs, Express Scripts will become the largest PBM that is not owned by a health insurer. That’s a risky point of differentiation in a world migrating toward more integrated pharmacy and medical benefits.”

I made this point more colorfully in a New York Times article on the transaction:


Adam J. Fein, chief executive of the Drug Channels Institute, which studies the drug industry, said the recent mergers may lead to better coordination because the companies will be looking at health care from multiple angles.

Apparently, Express Scripts has decided that its go-it-alone strategy will no longer be viable. Like CVS Health, Express Scripts wants to defend itself against more vertically integrated PBM competitors, i.e., almost everyone else.

In the investor presentation linked above, the two companies summarize their combined businesses as follows: 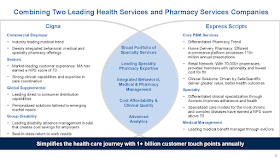 Other observations:
We are nearing the drug channel vertical integration limit, with few market participants left to acquire. Who’s next among who's left?