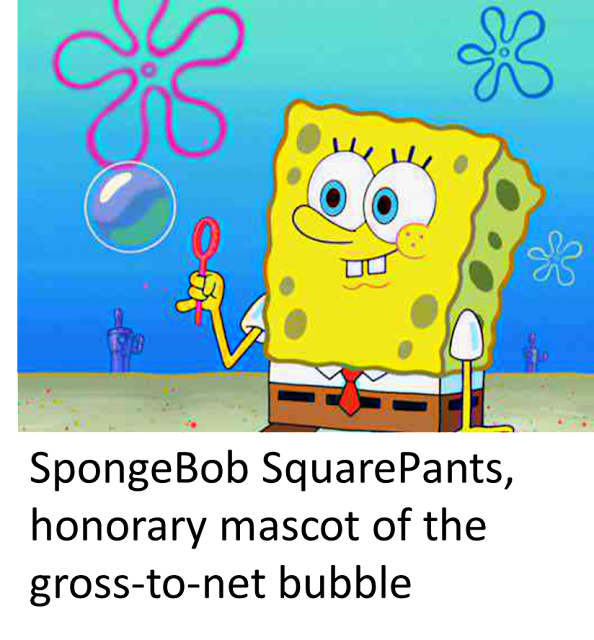 Did I just hear the gross-to-net bubble deflate a little bit?

This week, UnitedHealthcare announced that it would provide point-of-sale (POS) rebates to 7 million people enrolled in its fully insured commercial group benefit plans. Click here to read the press release.

UnitedHealthcare’s action is a big win for patients, though not (yet) a black swan event for pharmacies and pharmacy benefit managers (PBMs). As I explain below, it’s a small but significant move that will trigger new questions about drug prices, patients’ out-of-pocket costs, and channel economics.

I’m sure that SpongeBob SquarePants, honorary mascot of the gross-to-net bubble, is ready for change.

For useful Drug Channels context about UnitedHealthcare’s actions, I suggest the following resources:

I consider POS rebates to be a big win for patients with high out-of-pocket expenses on highly rebated drugs.

The gross-to-net bubble—the growing spread between a manufacturer’s list price for a drug and the net price after rebates—is creating significant challenges under current pharmacy benefit designs. Check out slides 10 and 13 from The Outlook for Pharmacy Benefit Management: Evolution or Disruption?, my keynote address from the 2018 PBMI conference.

Consumers with prescription drug deductibles and coinsurance do not benefit directly from rebates. They face high out-of-pocket costs because coinsurance amounts and payments within the deductible phase are based on a drug’s undiscounted, pre-rebate list price.

As I have noted frequently on Drug Channels, too many pharmacy benefit plans therefore operate like reverse insurance. The sickest people taking medicines for chronic illnesses generate the majority of manufacturer rebate payments. Today, these funds are used to subsidize the premiums for healthier plan members.

POS rebates flip this dynamic by replacing formulary payments made to plan sponsors with prescription discounts for patients at the point of dispensing. The value of the rebate goes to the patient whose prescription generated the rebate payment.

For these and other reasons, the Centers for Medicare & Medicaid Services (CMS) is evaluating a regulatory change that would require Part D plans to recognize the value of manufacturer rebates and pharmacy payments in retail prescription prices. (See Will CMS Pop the Gross-to-Net Bubble in Medicare Part D With Point-of-Sale Rebates?.) CMS estimates that a shift to POS rebates in Part D would reduce total out-of-pocket expenses for Medicare Part D beneficiaries, though monthly premiums would rise.

Hence, you should note what Secretary of Health and Human Services Alex Azar said on Tuesday:


“Today’s announcement by UnitedHealthcare is a prime example of the type of movement toward transparency and lower drug prices for millions of patients that the Trump Administration is championing. Empowering patients and providers with the information and control to put them in the driver’s seat is a key part of our strategy at the Department of Health and Human Services to bring down the price of drugs and make healthcare more affordable. We are already seeing clear momentum toward the type of innovation in the private sector that will be an important part of the value-based transformation that is coming to America’s healthcare system.”

Plan sponsors are the biggest barriers to POS rebate benefit designs. Health plans want to use the ever-growing rebate dollars to win business with lower premiums. CVS Health and Express Scripts both offer POS benefit designs to plan sponsors, though few of their clients have reportedly chosen to share rebates directly with patients.

Regardless, the impact of POS rebates on premiums should be minimal. As I showed in our analysis of some exclusive Express Scripts Data, most people don’t pay much for their prescriptions, but a few have thousands of dollars in out-of-pocket obligations. With only 7 million beneficiaries, the program will positively impact the few while not disrupting insurance benefits for the many.

Wholesalers will continue to sell brand-name drugs based on a discount from the drug’s list price. The third-party reimbursement received by a pharmacy for a brand-name prescription will remain linked to a drug’s WAC list price, not its net post-rebate price. PBMs will retain a comparable share of rebates and admin fees for each prescription.

Over the past two years, many people have begun to question these long-standing arrangements. Recall that in 2016, outrage over EpiPen’s pricing started a long-overdue conversation about pricing, rebates, and business models in the drug channel. Revisit the start of the movement with this September 2016 article: EpiPen, Channel Economics, and the Great PBM Rebate Debate.

Here’s what I told The New York Times in UnitedHealthcare Says It Will Pass On Rebates From Drug Companies to Consumers:


But UnitedHealthcare seems to have blinked, signaling what could be a coming shift away from the system of convoluted deals struck between the drug companies and these middlemen, said Adam J. Fein, president of Pembroke Consulting, a research firm. Although the new policy will only affect a fraction of the company’s customers, “it’s one more step on the path of creating a more transparent pharmacy supply chain,” Mr. Fein said.

Here’s a final radical question: Has PhRMA been right all along in its Share the Savings campaign?