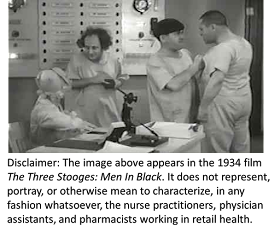 Last week, the Senate Judiciary Committee held an uneventful hearing on the CVS-Aetna merger. The lack of fireworks suggests that the deal is on track for approval later this year. Click here to read the testimony.

Despite the hype, there was little advancement in retail health at pharmacy locations. For the third consecutive year, the total number of retail clinics has remained essentially flat, at about 2,000 nationwide. CVS Health’s comments at last week’s hearing (highlighted below) would represent a major new direction.

P.S. Today’s post is adapted from Section 1.4.1. of our new 2018 Economic Report on U.S. Pharmacies and Pharmacy Benefit Managers. Friendly reminder: Discounted pricing for the report ends on Friday!

Our analysis is based on data from Merchant Medicine, which maintains an extensive and useful database of every U.S. clinic location. In some cases, the Merchant Medicine data differ slightly from other public sources.

The table below summarizes our 2018 analysis of the current retail clinic landscape for the biggest market participants. In 2017, the total number of clinics declined slightly. 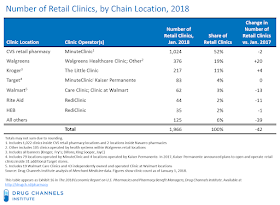 Here’s our update on the major players:
Many factors suggest ongoing growth in retail clinics, including comparable quality of care for some medical conditions and favorable consumer perceptions of retail compared with urgent care clinics. However, the 2017 slowdown highlights the ongoing barriers to continued growth.

CVS-Aetna plans to reverse these trends. In The CVS-Aetna Deal: Five Industry and Drug Channel Implications, the companies have an innovative and intriguing idea—but one that is unproven at this scale. Nyuk, nyuk.

This short video from my Ph.D. training is too good not to share again. Of course, those who work in retail clinics are not stooges. Let’s hope they have a sense of humor.