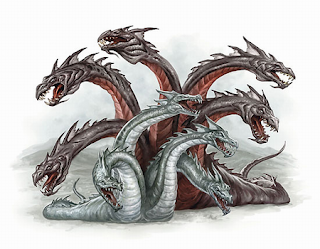 This transaction will create a healthcare organization with significant market share in the pharmacy, pharmacy benefit management (PBM), and health insurance businesses. There could be many potential opportunities for new consumer-oriented offerings. Finding the consumer value in this multi-headed $221 billion behemoth will be a major challenge.

Read on for my initial thoughts on the deal and what it means for PBMs, manufacturers, and pharmacies. I also highlight some of the implementation challenges.

Feel free to add your own thoughts on this mega-deal in the comments below. (Yes, you can comment anonymously.)

Given the consumer angle, the deal has been widely covered. Here are two useful news stories that outline the transaction:
Here are the official company documents:
Rumors about the deal have been circulating since late October. I recommend A merger between CVS Health and Aetna could be what the doctor ordered from The Economist in early November. That article also has a few comments from your friendly neighborhood blogger.

1) Manufacturers and pharmacies will face a mega-PBM. This may not bother the FTC.


A combined Caremark-Aetna PBM will have even more leverage with manufacturers and pharmacies. The Federal Trade Commission (FTC) will likely consider the PBM component of the transaction to be pro-competitive.

CVS Caremark’s largest customer is Aetna, which outsources part of its PBM to CVS Health’s Caremark business. Aetna, however, controls medical and pharmacy policy, formulary design, pharmacy/medical benefit integration, rebate contracting, and many other core PBM functions. As I discuss below, Caremark handles certain other functions.

For 2016, about 70% of all equivalent prescription claims are processed by three PBMs: Express Scripts, the Caremark business of CVS Health, and the OptumRx business of UnitedHealth. (See chart below, which appears as Exhibit 72 in our 2017 Economic Report on U.S. Pharmacies and Pharmacy Benefit Managers.) This concentration helps plan sponsors and payers, who can maximize their negotiating ability by combining their prescription volume within a few PBMs. 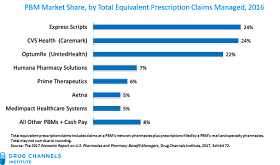 Consider the optimistic target for $750 million in the second full year. Per page 16 of the investor presentation below, I suspect that a big chunk of these savings will come from purchasing. On yesterday’s investor call, the companies even stated that there may be no revenue synergies. For context, you may want to revisit the FTC’s decision in the Express Scripts-Medco Health Solutions merger. I reviewed it in 2012’s ESRX-MHS: Analysis of the FTC Decision. You also have the opportunity to reacquaint yourself with the econ-nerd concept of oligopsony—a market in which there are many sellers but few buyers.

I suspect that the FTC will instead focus on the implications of vertical integration and the companies’ Part D businesses (discussed below).

Specialty drug spending is split between the pharmacy benefit and the medical benefit. Managing drug spend across these two categories is a perpetual challenge for health plans and payers. Patients who take expensive specialty drugs also tend to have high medical expenses. That’s one reason that hospitals are rushing into the specialty pharmacy dispensing business. (See Why Manufacturers and PBMs Should Worry About the Growth of Hospital-Owned Specialty Pharmacies.)

CVS has struggled to penetrate medical benefit management. It has a wide diversity of dispensing channels. In 2013, CVS bought Coram to grow share in specialty infusion services. However, it still lags competitors in the ability to influence patients, providers, and spending across both medical and pharmacy benefits.

Regular readers know that I believe the Amazon hype has been wildly overblown. (Example: The Latest on Amazon’s Pharmacy Ambitions—And a Possible Express Scripts Collaboration) That said, Amazon will face even greater hurdles to moving beyond prescription fulfillment as pharmacy benefit management becomes fully integrated with medical benefits. You may have even heard me (briefly) discuss Amazon on National Public Radio's All Things Considered last night.


If Caremark and Aetna combine their PBMs, Express Scripts will become the largest PBM that is not owned by a health insurer. That’s a risky point of differentiation in a world migrating toward more integrated pharmacy and medical benefits.

It’s also why Express Scripts seems far more focused on drug prices than on overall healthcare spending. When all you have is a hammer, everything looks like a nail.

But here’s a contrarian view: A combined CVS-Aetna business will have perceived or actual conflicts with other health plans. This creates an opportunity for Express Scripts to peel clients away from the Caremark-Aetna PBM business.

Consider CVS Caremark’s business today. It has routinely bragged that it is the “Best Partner for PBMs and Health Plans.” Caremark offers its own SilverScript plans—but also supports the Medicare Part D and Medicare Advantage offerings of more than 40 health plans. It also services about 70 other health plans clients. In 2017, two-thirds of CVS Caremark’s total new PBM business came from health plans.

And Caremark will support IngenioRx, Anthem’s new PBM. CVS Health CEO Larry Merlo stated yesterday that the Aetna merger will have “no bearing” on the Anthem arrangement.

Given these relationships, it’s no surprise that CVS Health emphasized the following point:


“Aetna will remain a separate business unit—structurally, operationally and legally—after the deal closes. All business units will maintain appropriate firewalls.”

Express Scripts is clearly hoping that CVS Health will struggle to win and retain the business of insurers that compete with Aetna.

4) There will be minimal changes to the companies’ specialty pharmacy operations.

5) The companies face a huge integration and implementation challenges.


How will the now highly-indebted CVS Health find genuine synergy from its sprawling operations and disparate corporate cultures?

The companies cite many worthy goals and noble aspirations about costs, access, innovation, and more. A combined CVS-Aetna organization could potentially be of great benefit to consumers, because there will be an opportunity to offer more efficient and more effective health insurance (as I told The Washington Post in late October).

But there is a long road ahead. The antitrust review will be lengthy, extensive, and highly controversial. Meanwhile, Caremark will be battling to gain and retain PBM market share. What’s more, competing insurers will exploit the integration chaos to grab insured lives. The company also faces potentially massive healthcare system change if Democrats retake Congress and the presidency in 2020.

Those of us with long memories will recall the turmoil following the CVS Caremark merger. It took much longer than anyone expected for the companies to discover and capture meaningful synergies beyond the initial procurement savings. The companies also had to sacrifice margin to gain some of the benefits of the combination.

A crucial element of the strategy involves converting CVS stores into “health care hubs.” These will apparently provide a range of healthcare services with minimal or no care provided by physicians. These hubs will somehow also help people shop for and navigate their insurance benefits.

It’s an innovative and intriguing idea—but one that is unproven at this scale. Here’s what I told The New York Times in How Will Consumers Fare if CVS and Aetna Merge?:


Analysts and others said one of CVS’s biggest obstacles, requiring significant investment and time, would be to transform its drugstores into a broader medical setting.

“It’s going to face many hurdles,” said Adam J. Fein, president of Pembroke Consulting, who researches the drug-distribution industry. He said changing people’s minds about what happened inside a CVS—and persuading them to seek out medical services there beyond getting a flu shot—could be difficult. And some have raised questions about whether the care will be disjointed and low quality.

“I wouldn’t underestimate the barriers that existing providers” will throw in the way, Mr. Fein said. He noted that in recent years hospitals had been competing in the same area, setting up urgent-care clinics and more closely coordinating with primary-care doctors.

How you feel about CVS becoming “a new front door to health in our country” (as Larry Merlo said) tells whether you believe the merger’s goals are clever or foolhardy. Will consumers embrace retail-delivered healthcare and insurance?

The next few years will be bumpy for the new CVS Health and its customers, suppliers, employees, and shareholders. Taming this hydra will be at least twelve labors for Larry Merlo and company.