What’s Behind the Slowdown in Specialty Pharmacy M&A Deals? 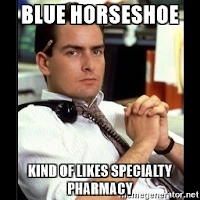 It looks like specialty pharmacy merger & acquisition (M&A) activity has slowed down.

In 2017 so far, only seven deals involving specialty pharmacies and infusion services companies have been announced. Each is listed below, along with the 10-year M&A trends.

What’s going on? Are buyers skittish over slower specialty industry revenue growth? Are they nervous about the still-unsettled impact of Direct & Indirect Remuneration (DIR) fees? Are the big dealmakers on the sidelines, digesting their previous purchases? Or will we see a surge of deals before year’s end?

We project that in 2021, the pharmacy industry’s revenues will be about $572 billion—and that specialty drugs will account for 42% of that figure. See Our Exclusive 2021 Outlook for Specialty Pharmacy Prescription Revenues.

Given these growth prospects, there has been an active market for the buying and selling of specialty pharmacy and infusion services companies. The chart below shows the Braff Group’s count of M&A transactions during the past 10 years. 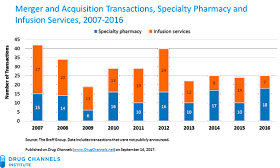 In the past few years, the total number of deals has been lower compared with the 2010 to 2012 period. The Braff Group attributes this slowdown partly to a decline in the number of very active serial acquirers. Many of these companies have slowed acquisition activity, e.g., Walgreens, or been acquired themselves, e.g., CarePoint Partners. For full details see Braff’s excellent report The Fine Young Cannibals in Pharmacy Services M&A.

For our review of last year’s 14 major publicly announced transactions, see Specialty Pharmacy M&A: Our Look at 2016’s Deals. For an overview of the specialty pharmacy market, see Chapter 3 of our 2017 Economic Report on U.S. Pharmacies and Pharmacy Benefit Managers.

Below is our list of deals that were publicly announced in 2017. I include links to some relevant Drug Channels articles, but not to each deal’s public announcement. Transactions are listed alphabetically by acquirer’s name.
If I missed your favorite deal, email me. Be sure to include a link to the public announcement.

We could still see a flurry of deals before 2017 is over. I’ll revisit the list in January. In the meantime, remember: Money never sleeps.