Below, we highlight the report’s revenue and gross margin trends for the U.S. drug distribution businesses of the Big Three wholesalers—AmerisourceBergen, Cardinal Health, and McKesson.

As you will see, we project that revenue growth in 2017 will be the slowest since 2013. We estimate that core U.S. drug distribution gross margins peaked in 2015 and have declined ever since.

The chart below shows total revenues since 2012 for the Big Three wholesalers’ total U.S. drug distribution businesses. Note that these figures include sales of traditional, specialty, and generic drugs. To facilitate comparisons, we present the summary financial information on a calendar-year basis, although each of the three large wholesalers reports financial results using different fiscal-year schedules. 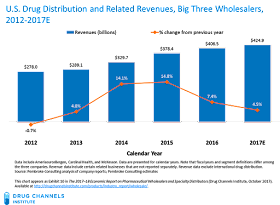 We estimate that in calendar year 2016, U.S. revenues from the drug distribution divisions of these Big Three wholesalers were $406.3 billion, a 7.4% increase over the 2015 figure. We project that the companies’ combined drug distribution revenues will reach $424.9 billion in 2017, a 4.5% increase from the 2016 figure.

We expect revenue growth to slow in 2017 due to:
We project that drug distribution revenues at the Big Three wholesalers will increase by $139 billion, to $545 billion in 2021. Check back in September 2022 to see if we are correct!

Gross Profit equals the revenues that a wholesaler receives minus the cost of products (net of discounts and returns) bought from a manufacturer or another wholesaler. Gross profit measures the portion of these revenues available for the operating expenses and operating profit of a wholesaler. It reflects how much a wholesaler is compensated for taking on specific tasks and functions in the distribution system. Gross margin expresses gross profit as a percentage of revenues.

The chart below provides our estimates for the underlying gross margins for core U.S. drug distribution at the Big Three wholesalers. We estimate that wholesalers’ gross margin peaked in 2015 and has since declined by more than 70 basis points, to 3.24% in 2017. 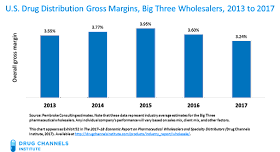 A few caveats about these data:
Exhibits 51 and 53 of our forthcoming report deconstruct buy-side and sell-side gross margin components, distinguish profits generic and brand-name drugs, and explain distribution service agreements (DSAs) with manufacturers. New for the 2017-18 edition: Our deconstruction of wholesaler buy-side and sell-side gross margins for the drug distribution of brand-name drugs now includes separate estimates for: (1) wholesalers’ largest six pharmacy customers, (2) all other retail, mail, and specialty pharmacy customers, and (3) healthcare providers. The presentation of the generic drug figures now reflects sell-side discounts from published list prices.

The profit declines and negative industry trends partly explain why the stocks of the largest public wholesalers are valued at a steep discount to the overall stock market average. We expect the headwinds to remain in 2018.
Adam J. Fein, Ph.D. on Tuesday, September 26, 2017