Yesterday we got some pre—July 4th fireworks.

With a potential FTC battle looming, WBA made the debt-laden Rite Aid an offer that it couldn’t refuse.

Before you head off for the long holiday weekend, please enjoy these thoughts on the new transaction along with commentary on Fred’s and the drug wholesalers. 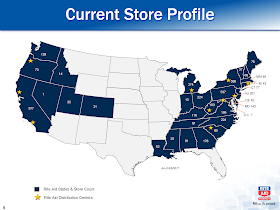 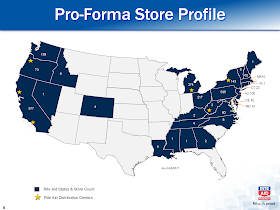 The Wall Street Journal nicely summarized the total store counts that would result from a completed deal. 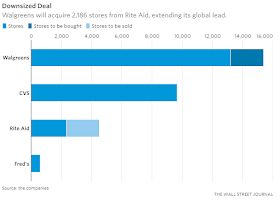 When WBA announced its acquisition of Rite Aid, I expected the Federal Trade Commission (FTC) to approve the deal. So, I was...half right?

To me, the new transaction looks like another shrewd maneuver by Stefano Pessina, our global channels overlord and executive vice chairman and chief executive officer of WBA.

Walgreens Boots Alliance has snatched victory from the jaws of a big fight with the FTC. Pessina and his team have devoted two years to learning about the FTC’s antitrust concerns. On yesterday’s earnings call, the WBA team sounded very confident that they had crafted a deal that would pass regulatory muster. It should also be easier to get approval because the new transaction is an asset purchase, not an acquisition.

Alas, this transaction is a disappointing final act for Rite Aid’s long quest to become a national chain.

After Rite Aid’s 2007 acquisition of Brooks-Eckerd, the combined company had more than 5,100 stores. Back in the very early days of Drug Channels, I argued that the deal made sense given marketplace dynamics. However, I also cautioned: "If you tie two rocks together, they still won’t float."

If the new WBA transaction is successful, Rite Aid will have about 1,000 fewer stores than it had in 2006, before the Brooks-Eckerd deal. As the second map above shows, most of Rite Aid’s remaining stores will be on the West Coast and in selected Mid Atlantic and Midwest states (PA, NJ, OH, MI).

Rite Aid will struggle to remain relevant in a pharmacy industry that favors both large chains and smaller, more nimble independents. Here’s what I told Bloomberg yesterday:


"They are going to struggle unless they get more scale," said Adam Fein, president of Pembroke Consulting, which advises drugmakers on sales and distribution. Rite Aid "is kind of stuck in the middle" between the two big national chains -- Walgreens and no. 1 CVS Health Corp. -- and small independent pharmacy chains, Fein said. As a result, it has trouble competing for placement on narrow pharmacy networks that health plans and pharmacy-benefit managers have been increasingly putting into place, Fein said, and getting smaller won’t do anything to solve this problem.

Rite Aid appears to be holding on to EnvisionRx, its small pharmacy benefit manager (PBM). But a smaller geographical and store footprint will make its CVS Health mini-me strategy much more difficult.

On the plus side, Rite Aid will reduce its debt load substantially. This could make the company more attractive to financial buyers, who may want to combine Rite Aid with Fred’s or other smaller chains.

Fred's growth strategy is now in tatters. In December 2016, Fred’s, the largest regional drugstore chain, announced its acquisition of 865 Rite Aid stores for $950 million. The Fred’s acquisition was contingent upon WBA’s merger with Rite Aid. Oddly, Fred's management seemed undeterred in this press release. Can the struggling Fred’s survive alone in a hypercompetitive pharmacy industry?

For more on the business and financial dynamics of the pharmacy industry, see our 2017 Economic Report on U.S. Pharmacies and Pharmacy Benefit Managers.

WHAT ABOUT THE WHOLESALERS?

The deal is positive for McKesson and AmerisourceBergen, but it’s disappointing for Cardinal Health.

The 2,183 Rite Aid stores that WBA is acquiring will eventually transition from McKesson to AmerisourceBergen. The volume will be lower than it would have been if the entire Rite Aid business had been acquired by WBA. Gi

McKesson had projected in May that Rite Aid would contribute $13 billion in annual revenues for its 2018 fiscal year (ending on March 31, 2018). We estimate that McKesson will retain more than half of those revenues.

Cardinal Health loses the prospective benefit from the new WBA-RAD transaction. In 2014, Fred’s switched its business from AmerisourceBergen to Cardinal. Since Fred’s will not acquire the Rite Aid stores, its volume will no longer transition from McKesson to Cardinal. And if Rite Aid acquires Fred’s, then all of Fred’s volume could migrate to McKesson.

I will double down and predict that the FTC will approve the revised transaction. Before you leave early today, please feel free to share your own views in the comments below.