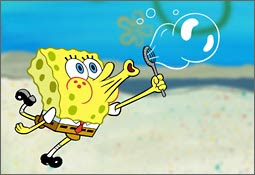 Despite a slowdown in brand-name drug list prices, the gross-to-net bubble is alive and well. The bubble reflects the growing spread between a manufacturer’s list price for a drug and the net price to a third-party payer after rebates.

According to the most recent QuintilesIMS report, the total value of pharmaceutical manufacturers’ off-invoice discounts, rebates, and other price concessions has more than doubled over the past five years, from $59 billion 2012 to an astonishing $127 billion in 2016.

Those payments offset more than half of the increase in list-price based spending. And though the gap between invoice and net prices shrank in 2016, the value of manufacturers’ discounts and rebates payments still grew last year, by $11 billion.

Below I delve into these data and share my observations. Tomorrow, I’ll examine how the bubble affects patients’ out-of-pocket costs and how CVS Health’s PBM business hopes to survive when the bubble pops.

EVERY LITTLE BUBBLE EVER BLOWN

To measure the value of manufacturer payments into the system, we rely on QuintilesIMS’s useful Medicines Use and Spending in the U.S.: A Review of 2016 and Outlook to 2021.

QuintilesIMS reports the total value of manufacturers’ off-invoice discounts, rebates, and other price concessions. These amounts include formulary rebates as well as distribution fees, product returns, chargeback discounts to hospitals, price reductions from the booming 340B Drug Pricing Program, and other purchase discounts. We estimate, however, that the formulary rebates that manufacturers pay to third-party payers and PBMs are the largest and most significant single component. (See Section 5.3. of our 2017 Economic Report on U.S. Pharmacies and Pharmacy Benefit Managers.)

The chart below shows that the total value of these off-invoice discounts, rebates, and other price concessions was $127 billion in 2016. These payments have grown substantially, particularly in the past five years. 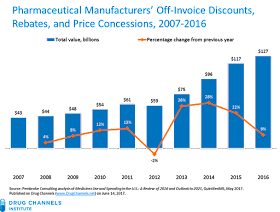 Here are my three key observations on these data:

1) Growth in invoice prices was offset by rebates and discounts.


The total value of undiscounted pharmaceutical purchases grew over the past five years by $132 billion, from $318 billion 2012 to $450 billion 2016. As I explain in Latest Data on Pharmacy Market’s Evolution, these figures reflect the total purchases at invoice prices paid to wholesalers by pharmacies, hospitals, and other healthcare providers.

Over the same five years, manufacturers’ off-invoice discounts, rebates and other price concessions grew by $67.9 billion (+115%). These payments accounted for more than half of the total $132 billion growth in undiscounted purchases.
2) Manufacturers earned substantially less revenue than a drug list prices imply.


QuintilesIMS provides data on “net spending,” which it defines to be “company recognized revenue after off-invoice discounts, rebates, and price concessions are applied.” These data therefore reflect the net revenues received by pharmaceutical manufacturers. For 2016, this net revenue figure was $323 billion [= $450 billion - $127 billion].

An excellent study by Berkeley Research Group (BRG) found that pharmaceutical manufacturers received only 62% of the list price of brand-name and generic drugs. The figure from the BRG study therefore implies that manufacturers’ gross revenues were about $521 billion* [= $323 billion / 62%].

Those revenues were reduced by $127 billion. It’s a key reason why the average increase in drug spending for 2016 was only 3.3%.
3) The gap between invoice and list prices is still growing.


QuintilesIMS provides further evidence that net drug prices are increasing much more slowly than are gross prices. The chart below compares invoice and net price changes for what QuintilesIMS calls “protected brands.” These are defined as products that are more than two years old and have not yet faced generic competition. In 2016, invoice prices grew by 9.2%, but net prices grew by only 3.5%. 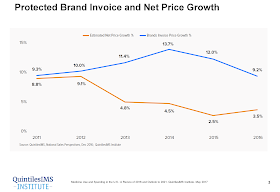 As the list price of a manufacturer’s products rises, the dollar value of the manufacturer’s rebates grows. The gap between invoice and net prices narrowed in 2016. However, the total value of manufacturers’ rebates and discounts grew by 9%, from $117 billion to $127 billion. (See our first chart above.)

As far as I know, only three manufacturers have reported gross vs. net prices:

Tomorrow, I’ll examine what happened to the $100+ billion of rebates and how one PBM proposes to solve patients’ growing out-of-pocket problems—which are growing along with the bubble.