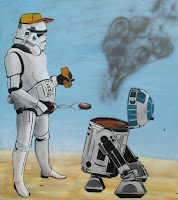 Summer is unofficially here! Before you break out the grill, check out these officially noteworthy items:
Plus, revisit Asembia’s 2017 Specialty Pharmacy Summit with an awesome photo gallery. You’ll find two of my favorites lurking below.

P.S. My @DrugChannels twitter feed now has an astounding 4,100 followers. Join them and see why!

Express Scripts is participating via Innovative Product Alignment (IPA), a newly created subsidiary that will gain some price transparency into—and be able to audit—WBAD. Express Scripts is not shutting down Econdisc and AmerisourceBergen will reportedly not gain additional volume from the arrangement. It's too soon to tell how hoppy this IPA will be.

We estimate that following this move, the three largest buyers of generic drugs will account for about 90% of total U.S. generic purchases from manufacturers. For profiles of the largest entities, see section 9.3.4. of our 2017 Economic Report on U.S. Pharmacies and Pharmacy Benefit Managers. The chart below appears in the report as Exhibit 126. 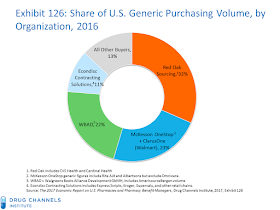 Curious about the origin of WBAD? See the “How WBAD Got Its Name” section of Breaking WBAD: An Update on Walgreens-Alliance Boots Synergies. 😉
Proposed Medicare Part D DIR Reporting Requirements for 2016, Centers for Medicare & Medicaid Services


Is it time for new Direct and Indirect Remuneration (DIR) reporting?

The Centers for Medicare & Medicaid Services (CMS) requires Part D plans to report extensive data on DIR. Recall that DIR is a broad term that encompasses various types of payments made to a Part D sponsor. For 2014 (the most recent year available,) manufacturer rebate payments accounted more than 94% of all DIR. (See DIR Fees, Rebates, Pharmacy Economics, and the Future of Medicare Part D.)

However, the per-prescription DIR fees that pharmacies pay to Part D plans are one of the pharmacy industry’s most controversial (and least understood) topics. Presumably, that’s why CMS has proposed changing the plans’ reporting requirements for these fees.

For 2015, there were two the pharmacy-related DIR reporting requirements:
For 2016, CMS has proposed separate reporting based on payments to and from pharmacies:
DIR items #8 and #9 also have expanded definitions, which appear on pages 20 to 22 of the proposed requirements. If finalized, these changes will give CMS greater visibility into the flow of funds between PBMs and pharmacies.
Financing and Distribution of Pharmaceuticals in the United States, Journal of the American Medical Association


The American Medical Association’s (AMA) premier journal has published a new article that provides a summary view of the U.S. drug distribution and reimbursement system. It’s a bit simplified and misses some important dynamics, but I suppose it has the advantage of being a peer-reviewed primer. Fun fact: Two of the article’s nine citations were written by yours truly!
Asembia’s 2017 Specialty Pharmacy Summit photo album, Flickr


Enjoy some cool photos from this awesome conference. You can read my thoughts on the event in The State of Specialty Pharmacy 2017: Reflections from #Asembia17. Here’s a day vs. night comparison of my time in Las Vegas. See if you can figure out which is which.
[Click to Enlarge] 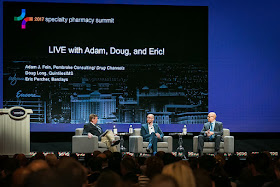 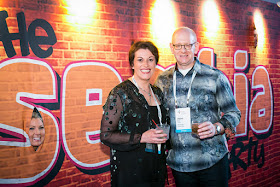