Which PBM Best Managed Drug Spending in 2016: How Did OptumRx Compare? 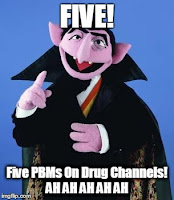 In Which PBM Best Managed Drug Spending in 2016: CVS Health, Express Scripts, MedImpact, or Prime?, I examined the 2016 drug trend reports from four leading pharmacy benefit managers (PBMs). OptumRx, the PBM business of UnitedHealth, released its report too late to be included in that analysis.

The charts below remedy this omission. The data now include five major PBMs, which accounted for more than 80% of equivalent prescription claims in 2016. After we add OptumRx’s results, the claims-weighted average increase in drug spending for 2016 was only 3.3%.

These results again confirm that the supposed drug spending problem is a myth. However, some patients experience significant out-of-pocket cost increases, due largely to cost-shifting by plan sponsors. With such low overall spending growth, the next battle will be over how best to share the savings from PBM-negotiated rebates.

NOT THE WHOLE STORY

The 2016 OptumRx Trend Insights report, which covers the period from January 2016 through November 2016, is not publicly available. This means that I can only discuss the high level results on Drug Channels. (I asked for permission to share the 15 page report, but OptumRx turned me down.)

As an alternative, you can review OptumRx’s publicly disclosed data for the period from January 2016 through August 2016. These data were reported on this web page: OptumRx Trend Update. The full report’s figures are broadly similar to OptumRx’s publicly-disclosed data, with one notable exception. The 2016 OptumRx Trend Insights report (using data through November 2016) shows a much lower overall drug trend than the published figures (using data through August 2016). OptumRx told me that the discrepancy occurred because calculated rebate projections were lower than actual rebates.

The OptumRx data were based on its carve-out commercial, and carve-in administrative services only (ASO) commercial book of business. The trend figures are presented net of rebates. The company did not report the sample size.

A reminder: drug trend measures the year-over-year changes in a plan sponsor’s pharmacy benefit drug spending. The chart below summarizes the reported 2016 commercial drug trend figures from the five PBMs. 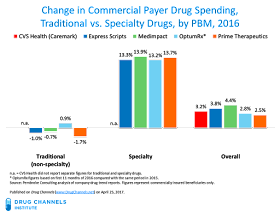 The data give us an excellent picture of the overall market. For 2016, these five PBMs accounted for more than 80% of U.S. retail, mail, long-term care, and specialty equivalent prescription claims. (See exhibit 72 of our 2017 Economic Report on U.S. Pharmacies and Pharmacy Benefit Managers.)

As you can see, four PBMs reported that plan sponsors experienced low-single digit growth in overall pharmacy benefit spending. At OptumRx, traditional drug spending grew slowly, but it declined at other PBMs. Reported specialty drug spending growth at OptumRx was 13.2%, which was comparable with the other PBMs.

Unlike its peers, OptumRx did not report the share of its clients that spent less on pharmacy benefit drugs in 2016 than they did in 2015.

The public debate seems to focus only on drug list prices, but that's a very misleading indicator. Growth in spending comprises both prescription utilization and the net, post-rebate cost of drugs. Understanding the mix of cost and quantity is crucial to understanding what drives drug spending.

Here’s our updated chart showing the components of drug spending changes. The underlying components of trend differed somewhat among the five PBMs. OptumRx's figures appear to be roughly comparable to those of its peers. 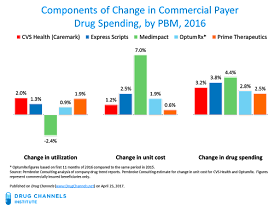 Note that changes in unit costs reflect more than just price changes. For a PBM's book of business, unit cost trend also includes such product mix factors as: 1) shifts to different drug options within a therapeutic class, 2) a shift in the therapeutic classes utilized by beneficiaries, and 3) the substitution of generic drugs for brand-name drugs.