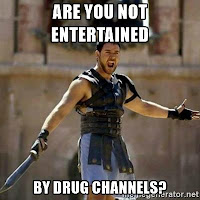 Four of the largest pharmacy benefit managers (PBMs)—CVS Health, Express Scripts, MedImpact, and Prime Therapeutics—have raised their swords and released their 2016 drug trend reports. (Links below.) That means it’s time for some Drug Channels-style fun! Below, I review what the reports reveal about drug spending—and which questions remain unanswered.

Drug trend measures the year-over-year changes in a plan sponsor’s pharmacy benefit drug spending. As you will see, all four PBMs reported that their drug trend percentages for 2016 were in low single digits. The unweighted average among them was a mere 3.5%. About one-third of PBM clients experienced year-over-year declines in drug spending.

Specialty drugs have doubled as a share of plan sponsors’ benefit costs. Since these products account for only about 1% of claims, pharmacy benefit management is increasingly focused on handling these patients and their complex, hard-to-treat diseases. Unfortunately, payers seem set on discriminating against people who receive these therapies.

Keep in mind that the PBMs’ reports are primarily marketing documents, not peer-reviewed research studies. But as many PBM executives have said: What we do in life echoes in eternity!

We enter the arena with the four PBMs’ 2016 drug trend reports. As always, I encourage you to have the strength and honor to review the source materials for yourself.
The larger PBMs that are owned by health insurers—Aetna, Humana, and OptumRx (UnitedHealth)—don’t publish drug trend reports. (UPDATE: See comment below.) As far as I know, none of the smaller PBMs releases any information on their management of drug trend.

FYI, Express Scripts provides the most complete reports in the colosseum. I delve into their data in Express Scripts Reveals What Really Drives Drug Spending—And Why the Government May Do No Better.

The chart below summarizes the reported 2016 commercial drug trend figures. As you can see, all four PBMs reported that plan sponsors experienced low single digit growth in pharmacy benefit spending. I know that complaining about “drug prices” is politically fashionable. Yet it appears that drug spending may be growing at a rate comparable to (or slower than) that of other parts of the healthcare system. 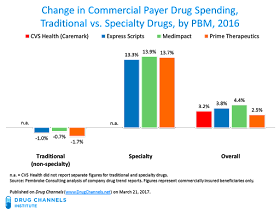 Three of the four PBMs provided the share of its clients that experienced negative trend, i.e., those payers spent less on pharmacy benefit drugs in 2016 than they spent in 2015.
Note that CVS did not report separate trend figures for traditional and specialty drugs, and would not provide the data when I asked. However, the company told me that it would publish a specialty trend report sometime in Q2. Such an exciting mystery!

ARE YOU NOT ENTERTAINED?

Here are my observations on the 2016 results.

1) The components of drug spending changes vary among PBMs.


The total change in drug spending equals the sum of changes in unit cost and changes in utilization. Understanding the mix of price and quantity is crucial to understanding what drives drug spending. For a more complete discussion, see my post on the Express Scripts report.

As the chart below illustrates, the underlying components of trend differed among the four PBMs. 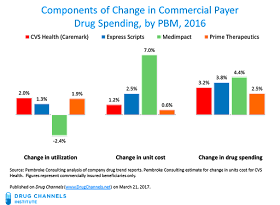 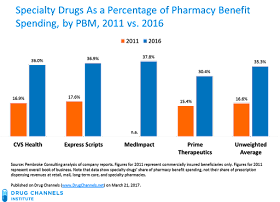 MedImpact reported that specialty claims accounted for a mere 0.88% of commercial claim volume. I presume that the figures were comparable at the other PBMs, which didn’t report claims. The disparity between claim volume and costs represent a dangerous trend for patients. As I note in Employer Pharmacy Benefits in 2016: More Specialty Drug Cost-Shifting Means More Problems for Patients, third-party payers increasingly discriminate against the few patients taking specialty drugs.


In previous years, the PBMs’ trend figures were often vastly different. But for 2016, the traditional, specialty, and overall trend figures are surprisingly comparable. Express Scripts, Medimpact, and Prime all reported that spending on traditional drugs declined while spending on specialty drugs grew by 13% to 14%.

I attribute this convergence to measurement approaches that are more similar than those in my previous analyses. Here’s my table summarizing the methodology behind the 2016 numbers. 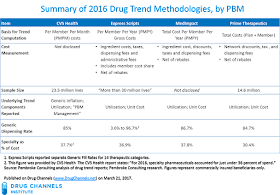 Consider rebates. For 2016, the PBM figures show the change in drug spending net of rebates. Prior to 2015, rebates were excluded from some PBMs’ drug trend figures but included in others. The 2016 results therefore may not comparable to previous years’ reporting that excluded rebates. This more consistent treatment of rebates partly explains the similar drug trend figures. For more on rebates, see Section 5.3. of our 2017 pharmacy and PBM report.
4) Each PBM uses a different sampling approach.

I WILL HAVE MY VENGEANCE

I know you come to Drug Channels for the best in PBM gladiatorial action. So, here’s something to crowe about: a private home video of me reading emails from readers. Click here if you can’t see the video.