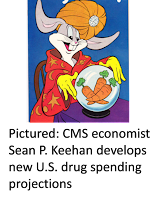 These new data don’t account for any changes in policy or the law, such a repeal of the Affordable Care Act (ACA). They do, however, show drug spending growth below that of CMS’s July 2016 projections. The updated forecasts predict that through 2025, drug spending will grow at roughly the same rate as will total U.S. healthcare spending.

By 2025, the U.S. is expected to have spent about $597 billion annually on outpatient prescription drugs. Just seven months ago, the 2025 figure was projected to $615 billion. Below, I also review drug spending projections by payer. CMS expects that drug spending will account for a stable share of private insurance, but a bigger part of Medicare spending.

Note that these projections will be revised when the law changes. For now, we have only CMS’s vision. Reality will render its own opinion soon.

Economists at the Centers for Medicare & Medicaid Services (CMS) publish annual projections for U.S. National Health Expenditures (NHE), including prescription drugs sold through outpatient retail, mail, long-term care, and specialty pharmacies. These projections are based on the current laws, including the Affordable Care Act (ACA). I review the July 2016 projections in Section 4.3.2. of our new 2017 Economic Report on U.S. Pharmacies and Pharmacy Benefit Managers.

U.S. drug spending in the NHE is roughly equivalent to total retail, mail, long-term care, and specialty pharmacies’ prescription revenues minus manufacturer rebates to third-party payers. To learn more about these data, read the “Look into my crystal ball” section of Latest CMS Forecast Shows Big Drug Spending Growth Through 2025. Note that these data do not measure total U.S. spending on prescription drugs. Inpatient prescription drug spending within hospitals and nearly all provider-administered outpatient drugs are reported in other categories. This additional spending accounts for an additional 3% to 4% of national health expenditures.

The CMS forecasts assume that the ACA will continue to exist in its current form. The agency nonetheless projected that the number of uninsured Americans would increase, from 29.0 million in 2016 to 29.8 million in 2025. 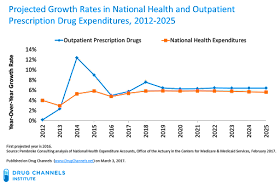 The spike in 2014 was due to two factors: (1) the launch of new hepatitis C treatments, and (2) the coverage expansion due to the ACA.

Prescription drugs’ share of spending varies by payer type. The chart below shows net outpatient drug spending as a share of U.S. national health expenditures for the three largest payers tracked in the NHE. 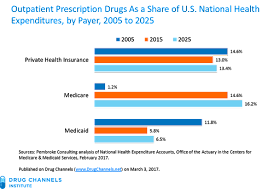 The percentages differ among payers partly because the populations covered by different payers have different medical needs. In addition, rebate amounts differ. Medicaid’s best price requirement means that it receives the deepest discounts. See Section 5.3.1. of our 2017 report for a detailed explanation of Medicaid rebates.

The changes from 2005 to 2015 reflect changes in coverage and the law. The Medicare Prescription Drug, Improvement, and Modernization Act (MMA) of 2003 created the Part D program, which launched in 2006. The MMA greatly increased Medicare’s spending on outpatient prescription drugs. Due to the Medicare Part D program, outpatient prescription drugs increased from 1.2% of Medicare’s total spending in 2005 to 14.6% in 2015.

Drug spending for dual-eligible beneficiaries—those eligible for both Medicare Part D and Medicaid—was shifted to Medicare. That’s a key reason that Medicaid’s spending on drugs dropped as a share of its total program spending.

For 2025, CMS projects that Medicare's outpatient drug spending will increase by 1.6 percentage points, to 16.2% of total Medicare spending. Spending on Part D prescription drug coverage is expected to grow faster than spending on Medicare Part A and Part B benefits. (See this chart.) By contrast, private insurance is projected to grow by only 0.3% percentage points, to 13.4% of spending.

During last Tuesday’s address to Congress, President Trump stated that he would "work to bring down the artificially high price of drugs and bring them down immediately." (Sorry, I’m not sure precisely what policy this statement implies.) As I note in Express Scripts Reveals What Really Drives Drug Spending—And Why the Government May Do No Better, utilization can be a more significant driver of spending than prices.