ICYMI: CVS drugstores were booted from the pharmacy networks of Blue Cross and Blue Shield of Alabama. It's more evidence for preferred and limited pharmacy networks in commercial plans. But how many payers are adopting these new narrow network models?

As far as I know, the only public answer comes from the Pharmacy Benefit Management Institute’s (PBMI) new 2016 Trends in Drug Benefit Design report. (Free download with registration.) Drug Channels again thanks Takeda Pharmaceuticals U.S.A. for having sponsored the research.

According to the PBMI’s survey data, almost half of all employers have a narrow pharmacy network. The chart below tracks the growth in different network designs. Many interrelated factors support the continued adoption of narrow networks. The savings to payers from narrow networks come primarily from pharmacies, which offer or must accept lower per-prescription margins. That’s what makes narrow networks so controversial—but also highly pro-competitive. Caveat venditor!

The PBMI survey collects data from employers, not PBMs. The 2016 edition includes responses from 337 employers that offer prescription drug benefits, accounting for an estimated 12.3 million covered lives. The sample population of the PBMI survey is similar to that of the Kaiser/HRET survey that I discuss in Employer Pharmacy Benefits in 2016: More Specialty Drug Cost-Shifting Means More Problems for Patients. The PBMI research goes much deeper into plan design than the Kaiser/HRET report, but has a much smaller sample size.

Just so you know, I was on the report’s Advisory Board, which meant that I was paid a small fee to review a pre-publication version of the completed research. Final responsibility for the report’s content rests with PBMI.

For consumers with third-party insurance, pharmacy benefit managers (PBMs) assemble networks of pharmacies. The chart below illustrates the concepts behind three basic pharmacy network models that a payer can select. 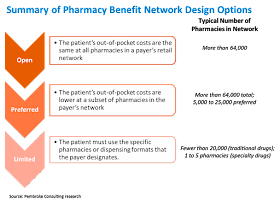 The chart below, created from various editions of the PBMI report, provides the only public data on the prevalence and utilization of these plans outside of the Part D program. For 2016, almost half of employers report using a narrow pharmacy network: 36% have a preferred network and a further 14% have a limited network. By contrast, only 29% used narrow networks in 2013. Most of the growth has come from preferred networks. 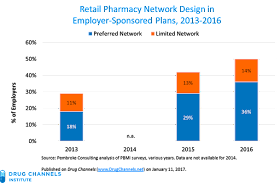 The major drugstore chains are now active participants in narrow network plans.
I’ll have much more to say about the impact of narrow networks for pharmacy economics in my forthcoming 2017 Economic Report on U.S. Pharmacies and Pharmacy Benefit Managers.