It’s a good time to revisit the EpiPen situation and see what it tells us about U.S. pharmaceutical industry pricing. After last week’s announcements, there are now four key products, each with its own list price and rebate arrangements:
As I explain below, these variations wonderfully illustrate the warped incentives embedded in our crazy drug channel. Will we make progress in popping the gross-to-net bubble?

MYLAN PLAYS NOT TO LOSE

In 2016, the use of rebates received new scrutiny following the controversial revelations about pricing increases for Mylan’s EpiPen.

ICYMI: Mylan increased the Wholesale Acquisition Cost (WAC) list price from less than $100 per two-pack in 2007 to more than $600 in 2016. Mylan argued (accurately) that it retained less than half of the list price, because of rebates paid to PBMs and health plans and the discounts paid to wholesalers and pharmacies. See EpiPen, Channel Economics, and the Great PBM Rebate Debate.

After some awkward Congressional testimony, Mylan released an unexpectedly detailed analysis of its EpiPen profits. (See this September 2016 SEC filing.)  Our chart below highlights the key points. 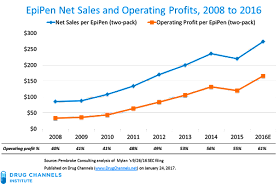 In response to the public outcry, Mylan launched an authorized generic (AG) version of its EpiPen. The WAC is $300 per two-pack—or less than 50% of the WAC of the brand WAC. Read the press release.

So now payers can choose from two EpiPen options:
While the AG version presumably has no PBM rebates, Mylan must still provide channel fees and discounts. However, I expect that these reductions may be low when compared with those for a typical multi-source generic. The wholesale channel has little negotiating leverage because it can’t substitute the AG for the branded product. Consequently, I estimate Mylan’s net revenues from the AG will likely be about $225 per two pack. That’s about 20% less than its net revenues for the branded product—and a much smaller discount than the 50% reduction in the AG’s WAC list price.

This will be an instructive situation for any manufacturer with big gross-to-net reductions. Perhaps it wouldn’t be so bad to sell at a lower price without rebates?

Last week, CVS Health switched from favoring EpiPen to promoting Adrenaclick, an authorized generic by Impax. Adrenaclick will now be available at CVS retail pharmacies at a cash price of $109.99 for a two-pack. Click here to read the press release.

Adrenaclick has been available for some time. Consumer Reports even highlighted the product last August in How to Get the Cheaper EpiPen Alternative.

CVS Health’s sudden switch from EpiPen to Adrenaclick may seem curious, but perhaps CVS’s tardy acknowledgment has something to do with EpiPen’s odd economics. 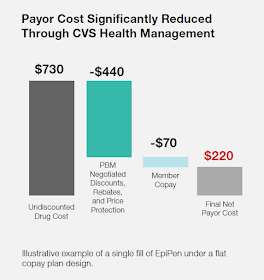 CVS Health’s chart is consistent with 50% to 60% rebates from Mylan. FYI, CVS stated in its December 2016 analyst day that “more than 90% of rebates overall passed to client.” That leaves potentially $30 to $40 in rebates for CVS Health.

In its October 2016 white paper, CVS Health promised: “…as soon as there is generic competition for the Mylan EpiPen, we will encourage plan members to use the lowest cost product...” Lo and behold, it rediscovered Adrenaclick just three months later.

I asked CVS why it hadn’t make this type of arrangement long ago, i.e., before EpiPen became national news? As you might expect, I did not get a clear answer. FWIW, here is CVS’s verbatim response:


“We consistently look for cost savings measures for our customers and consumers. Over the last several months, pricing for epinephrine auto-injectors has been the subject of consumer outcry, congressional investigation and media attention occasioned by a series of price increases for the market leader EpiPen manufactured by Mylan Pharmaceuticals. CVS Pharmacy recognized the urgent need in the marketplace for a less expensive epinephrine auto-injector for patients with life-threatening allergies, and was able to make Adrenaclick authorized generic available to provide this emergency treatment for allergic reactions, including anaphylaxis, at the lowest net cost to patients.”

Make of that what you will.

Kaléo, a little-known small pharmaceutical company, last week announced the relaunch of AUVI-Q, another epinephrine auto injector that had been pulled from the market. Click here to read the press release.

No, that’s not a typo. The list price is four thousand five hundred dollars.

Of course, no one will pay that ludicrous list price. Kaléo has set up multiple ways for some consumers to pay less:
Matt Herper at Forbes accurately described this strategy as a “Rube Goldberg Price Scheme.” I was bit less kind. Here’s what I told Forbes:


Adam Fein, president of Pembroke Consulting and author of the blog drugchannels.net, was even more skeptical, comparing the approach to that of Valeant Pharmaceuticals, which fell into disrepute because of the way it used specialty pharmacies. “Frankly it sounds a lot like a Valeant strategy, where you set a very high list price and you only capture the reimbursement on a very small percentage of prescriptions,” Fein said. “Instead of getting a reasonable price for everything, you are going to get nothing from most of the market and a lot from a very small percentage of the market. It’s almost an outdated strategy that seems designed to invite controversy.”

Comparing someone to Valeant is perhaps not the best way to make friends. To clear the air, I spoke with Eric Edwards, vice president of product strategy, after the Forbes article was published.

Dr. Edwards and his twin brother invented the AUVI-Q product and founded Kaléo. (It’s a very cool and impressive story.)  As you can imagine, Dr. Edwards is a very passionate defender of AUVI-Q. During our conversation, he was also extremely critical about market access problems when Sanofi was selling AUVI-Q.

Dr. Edwards argued that the $4,500 price is based partly on AUVI-Q’s "differentiated, superior value to the healthcare system." For example, a Sanofi-sponsored study found that consumers preferred AUVI-Q versus EpiPen. (source)  He emphasized that $4,500 is the “starting point” for negotiations and that “enough payers will see value in this product.”

Fair enough. But my initial mathematical observation still stands. Kaléo is betting on a bimodal distribution of reimbursements. Theoretically, Kaléo could end up with a net price of $270 per unit by selling 6% of its units at $4,500 and giving the rest away. I'm curious to see how the marketplace responds to a consumer-preferred epinephrine autoinjector with a sky-high list price.

WHAT HAVE WE LEARNED

As the list prices rise, rebates grow. The manufacturers end up paying more and more rebate money into the health insurance system, even when the net amount received by a drug maker is stable or even declining. Employers used these extra payments to offset costs in any area, including hospital and physician payments. Health plans used them to reduce premiums and also offset other healthcare costs. PBMs retained a portion of these rebates as their profits. Wholesalers and pharmacies benefit, too.

The epinephrine auto-injector marketplace shows the craziness. The channel and payer strategies range from reasonably sound to absolutely bonkers. (Looking at you, Kaléo!)

Let’s see if lower priced, cash-paid products come to dominate the market. If so, then we will have passed a real world test in popping the gross-to-net bubble and resetting the pharmaceutical industry’s economics. If not … get ready for change to be forced upon the system.