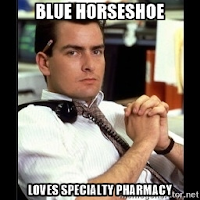 So it’s no surprise that there is a vigorous market for the buying and selling of specialty pharmacy companies. Let’s kick off 2017 with a quick review of last year’s 14 significant specialty pharmacy mergers a & acquisition (M&A) transactions. Our list below includes only deals that were publicly announced in 2016.

I expect many more transactions in 2017. If you’re looking to pick up a fast-growing specialty pharmacy, click here for your shopping list.

Transactions are listed alphabetically by the acquirer’s name. I include links to any relevant Drug Channels articles, but not to each deal’s public announcement.
There’s another interesting transaction worth noting. In 2016, Walgreens Boots Alliance (WBA) and Prime Therapeutics announced a new relationship that partly incorporates a specialty pharmacy merger. The two companies will combine their respective central-fill mail and specialty pharmacies to form a new company, which will have a new name. Both WBA and Prime will be represented on the combined company’s board of directors and executive team. Legally, the business will be a subsidiary of WBA, so its financials will be included within WBA’s broader financial reporting. (See Why the Walgreens/Prime Deal Could Transform the PBM Industry.)

If I missed your favorite deal, email me! Be sure to include a link to the public announcement.

P.S. Hat tip to Mike Hess at Bass Berry + Sims and Reg Blackburn at The Braff Group for highlighting a few deals that I had overlooked.