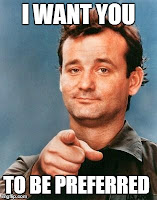 Just-released data from the Centers for Medicare & Medicaid Services (CMS) confirms that preferred cost sharing networks will continue to dominate Medicare Part D. Our exclusive analysis finds that for 2017, 73% of seniors are enrolled in Prescription Drug Plans (PDPs) with preferred pharmacy networks. The three biggest companies—Humana, UnitedHealthcare, and CVS Health's SilverScript—now account for 69% of enrollment in stand-alone Part D plans.

Below, we use the enrollment data to analyze the major pharmacy chains’ position within the 17 major multi-regional Part D plans with preferred networks. As you will see, Walgreens and Walmart are the big winners, while CVS and Rite Aid lag far behind.

For 2017, 85% of the total regional PDPs had preferred networks. Based on the initial enrollment figures, these 633 PDPs enrolled 14.9 million people, or 73% of the PDP total through December 9, 2016. That’s slightly lower than last year’s figure of 75% of PDP beneficiaries enrolled in a preferred plan.

The top 10 companies (shown below) account for 93% of enrollment. This figure is slightly higher than the 2016 figures. 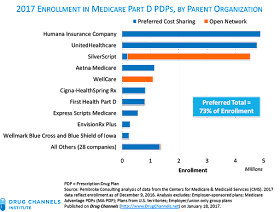 The top three parent organizations—Humana, UnitedHealthcare, and CVS Health's SilverScript—account for 69% of enrollment in stand-alone Part D plans. Here are the initial 2017 results from the largest plan sponsors:
THE PHARMACIES

In Walgreens Plays to Win: Our Exclusive Analysis of 2017's Part D Preferred Pharmacy Networks, we examined pharmacy participation in the 17 major multi-regional Part D plans with preferred networks. Based on the initial enrollment figures, these plans enrolled 13.7 million people, or 91% of the total beneficiaries enrolled in a preferred plan.

We can therefore use these data to measure each chain’s position in the 2017 preferred networks. The chart below shows the total enrollment in the plans for which each chain is a preferred pharmacy. 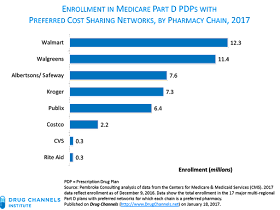 The data quantify the relative position of the major retail chains:
One potential upside for CVS: Part D beneficiaries who qualify for the Low-Income Subsidy (LIS) face low out-of-pocket drug costs regardless of a pharmacy’s preferred status. Nonetheless, it looks like Walgreens will gain significant prescription market share in 2017. That's the fact, Jack.