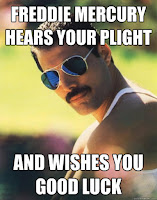 Below, I review our latest estimates on pharmacy economics and margins. The data reveal that independent pharmacy owners are starting to perform poorly. In 2015, the average pharmacist owning a single pharmacy earned about $200,000. It’s the second year in which the average owner’s compensation declined. The number of independent pharmacies and gross margins also are trending downwards.

Read on for my look at pharmacy profits and my advice for pharmacy owners.

These data have strengths and weaknesses. They do however provide the only publicly available, consistently published look at the financial position of independent pharmacies. Since I don't have access to the complete financial benchmarking report, some of the figure represent our estimates.

Gross profit equals a pharmacy’s revenues minus the costs of products (net of discounts and returns) bought from a manufacturer or a wholesaler. Gross margin expresses gross profit as a percentage of revenues.

Gross profit measures the portion of revenues available for operating expenses and operating profit. Operating expenses include: (1) payroll expenses—the wages, taxes, and benefits paid to the pharmacy’s staff, including the business owners, and (2) general business expenses—everything else needed to run the pharmacy, such as rent, utilities, licenses fees, insurance, advertising, and other business costs.

In a previous report, the NCPA Digest defined the sum of Owner Compensation and Operating Income as Owner's Discretionary Profit (ODP). Thus, ODP represents two of the three ways a pharmacy's gross profit dollars can be spent.

For more on pharmacy and prescription economics, see Chapter 10 of our 2016 Economic Report on Retail, Mail, and Specialty Pharmacies.

SIX OBSERVATIONS ON THE 2015 DATA

Once again, this survey's findings are consistent with government’s data, which also show stable drugstore gross margins. In 2014 (the most recent year for which data are available), the drugstore industry’s overall average gross margin, as reported by the U.S. Census Bureau, was 24.7%. The industry margin is higher than the independent pharmacy margin because higher-margin non-prescription front-end products account for a higher share of sales at chain drugstores.

I did not publish a post on the most recent Census data, but you can review the figures through 2013 in Surprise! Government Data Again Show Rising Drugstore Profits. 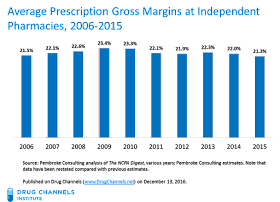 
I noticed an odd discrepancy. For independent pharmacies, the generic dispensing rate (GDR)—the percentage of prescriptions dispensed with a generic drug instead of a branded drug—was 82% in 2015. However, the GDR in the overall market was 83.4%. As the chart below shows, independent pharmacies have lagged behind the market since 2012. 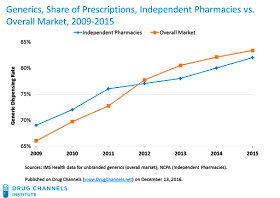 The data may illustrate how the independent market is evolving. As I have noted frequently on Drug Channels, entrepreneurial smaller pharmacies are proactively growing their specialty dispensing businesses. Consider the fast-growing independent specialty pharmacies highlighted in 2015’s Fastest-Growing, Private Specialty Pharmacies (From the Inc. 5000).

OBSERVATION 5: The average pharmacist owning a single pharmacy earned about $200,000 in 2016—down for the second year.


In this year’s sample, average annual prescription volume per pharmacy dropped by 1.7%, to 60,493 prescriptions. Combined with declining gross margins, this resulted in lower compensation for a pharmacy owner.

If you’ve been reading Drug Channels, then these financial trends will not be surprising. Competition is forcing pharmacies to reduce their prescription profit margins. Key pressures include:
As Peter Drucker said many years ago: “In a commodity market, you can only be as good as your dumbest competitor.”


Get Big, Get Focused, or Get Out.

This means that if you’re a small pharmacy and want to win in today’s consolidating drug channel, you need scale or differentiation. Otherwise, cash out gracefully.

Virtual scale can work, which is why almost all independents belong to both a group purchasing organization (GPOs) and a pharmacy service administration organization (PSAO).

Here’s a final thought for pharmacy owners from John Maxwell: “Change is inevitable. Growth is optional.” It's the terror of knowing what this world is about.