ICYMI, the Roche Group recently made a startling disclosure: For the first half of 2016, the 340B Drug Pricing Program accounted for 18% of Genentech’s volume.

I estimate that at that rate, hospitals and other 340B-covered entities claimed discounts on about $3.4 billion in purchases annually from Genentech. With profit margins averaging 58%, that figure translates into about $2 billion in financial benefits.

Where did the money go? Who benefited from these funds? Did financially needy patients have to pay their Part B coinsurance for 340B-purchased drugs from Genentech? We have no idea, because hospitals and their lobbyists fight any call for them to disclose or account for how they use their 340B profits.

I suspect that the Trump administration will take a dim view of the lack of transparency and excesses that have occurred in the 340B program. Expect significant change in 2017 and beyond.

I’LL SHOW YOU MINE

If you have any questions about the Roche data, feel free to contact Karl Mahler (Karl.Mahler@roche.com) at F. Hoffmann-La Roche Ltd. 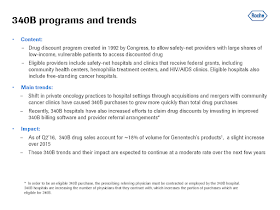 As far as I know, this is the first time that a manufacturer has publicly quantified its 340B exposure. I estimate that given typical discounts, 340B’s share of Genentech’s gross sales could have been 25% or higher.

We already know that 340B is extraordinarily profitable for hospitals. In the Medicare Part B program, average gross margin (reimbursements minus acquisition cost) for hospitals from 340B purchases was 58%. See New OIG Report Shows Hospitals’ Huge 340B Profits from Medicare-Paid Cancer Drugs.

Applying the 58% margin to the $3.4 billion of Genentech purchase yields the $2 billion figure. But it could be even more. For about one-quarter of the Healthcare Common Procedure Coding System (HCPCS) J-codes, reimbursement was more than double the 340B acquisition cost. Hospitals get much higher reimbursements from commercial payers than they do from Part B, so 340B margins are likely also higher.

WILL YOU SHOW ME YOURS?

Hospitals and their lobbyists loudly and frequently tout the falsehood that the 340B Drug Pricing Program amounts to “only 2%” of total U.S. drug purchases. I debunked this spin in Reality Check: 340B is 4% (not 2%) of the U.S. Drug Market—And Growing Quickly.

Given the latest evidence from Genentech, I wonder how long 340B lobbyists can stick to their well-worn—and demonstrably untrue—talking point.

And I also wonder: What precisely happened to Genentech’s billions?

It may have gone to worthwhile programs that supported legitimate safety net providers and provided financial support for needy patients.

Or perhaps it went to multi-million dollar executive compensation at 340B-eligible Carolinas Healthcare? (Read this article.)  Or maybe (per NPR) it was used for legal fees at Heartland Regional Medical Center, a 340B-covered entity that sued its poorest patients? Or maybe hospitals didn’t even offer the reduced 340B prices to uninsured patients? (See New OIG Report Confirms Our Worst Fears About 340B Contract Pharmacy Abuses.)

Genentech’s voluntary disclosure highlights a key problem with the 340B program’s current structure. Many covered entities legitimately require additional financial support. At the same time, there are also large, profitable, well-funded health systems that can use 340B profits in ways that are not linked to the drug discount program’s proper purpose.

As a start, hospitals should be required to account clearly for the billions collected from the 340B program. Looking ahead, the 340B program needs to be reformed so that it focuses clearly on genuine safety-net providers and financially needy patients.

I’m very curious to see how the new administration will tackle this issue.