A Post-Election Projection: The 2025 Payer Market for Prescription Drugs 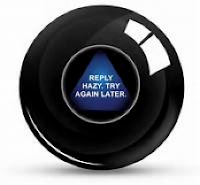 Alas, last week’s election exploded these projections. Today, I analyze CMS’s official pre-election insights about payment for outpatient prescriptions drugs in 2025. I then speculate on how these figures might change under the new administration, which wants to repeal and replace the Affordable Care Act (ACA). Based on the most well-known Republican proposals, I project a rebound in the employer-sponsored market compared with the CMS baseline projections.

But never forget a truism of the projection business: A good forecaster is not necessarily smarter than everyone else—he merely has his ignorance better organized.

I start with the July 2016 National Health Expenditure (NHE) data projections. These data assumed a business-as-usual scenario for healthcare spending.

The NHE shows the historical and projected payment sources for outpatient prescription drugs (share of dollars). U.S. drug spending in the NHE is roughly equivalent to total retail, mail, and specialty pharmacies’ prescription revenues minus manufacturer rebates to third-party payers. To learn more about these data, read the “Look into my crystal ball” section of Latest CMS Forecast Shows Big Drug Spending Growth Through 2025.

CMS projects drug spending projection by using unhelpful payer categories. See the footnotes in the charts for important information about my assumptions behind the spending categories in my charts.

Our first chart provides the baseline estimates of the 2025 payer mix, based on CMS’s July 2016 projections. 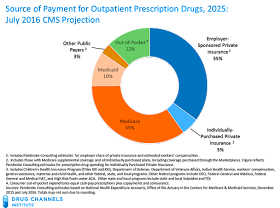 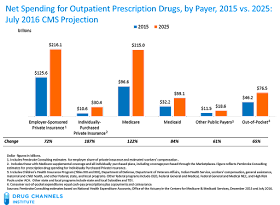 Here are my observations on CMS’s pre-election views on how the prescription drug market would evolve.
ON THE OTHER HAND

We now live in a world where the Affordable Care Act (ACA) will likely be repealed and replaced. One possible road map is the Restoring Americans’ Healthcare Freedom Reconciliation Act of 2015 (H.R. 3672), which President Obama vetoed earlier this year.

Something will replace the law, because Republicans don’t want millions of people to abruptly lose insurance. A useful starting point is Rep. Paul Ryan’s white paper A Better Way: Our Vision for a Confident America.

Here are my speculations on how an ACA repeal might affect the CMS projections.
AN ALTERNATE 2025 REALITY

Putting these speculations together yields the following provisional look at the source of payment under a repeal-and-replace scenario. For simplicity, I assumed the same overall drug spending in 2025. 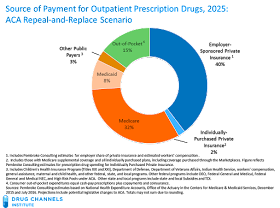 Of course, this SWAG will probably turn out to be wildly inaccurate. If you live by the crystal ball, then you must be prepared to eat broken glass. Yum!