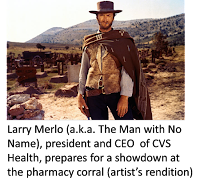 On Tuesday CVS Health lowered its profit outlook, due partly to “the projected loss of more than 40 million retail prescriptions related to marketplace changes, including new retail pharmacy networks that are excluding CVS Pharmacy drugstores.” Its stock closed down 12%, before bouncing back slightly in yesterday’s post-Trump healthcare rally.

The lesson? Don’t bet against Stefano Pessina, our global channels overlord and executive vice chairman and chief executive officer of WBA. Read on for my analysis of the latest pharmacy showdown.

THE QUARTER WITH NO NAME

As always, you should read the original source material for yourself. Here are links to the information about CVS Health’s third quarter earnings:
THE GOOD

CVS Health’s Maintenance Choice program is the most prominent limited network model for commercial plan sponsors. Under the program, a beneficiary can obtain maintenance medications from either a CVS retail pharmacy or a CVS Caremark mail pharmacy. This model lets consumers choose the pharmacy channel (mail or retail) but limits the choice to CVS Health dispensing channels.

Competing PBMs cannot readily match the Maintenance Choice program, because a separately owned PBM and pharmacy chain would battle over the per-prescription profit. CVS Health recently stated that Maintenance Choice and its other narrow network programs save payers about 5% to 8% of their non-specialty retail spend. See CVS Health’s Made-to-Order Networks white paper.

Plan sponsors—the pharmacy benefit management clients of CVS Caremark—have been quickly adopting the Maintenance Choice program. Below is Exhibit 87 from our 2016 Economic Report on Retail, Mail, and Specialty Pharmacies. In 2015, 23 million covered lives were enrolled in the program, up from 2.9 million in 2009. 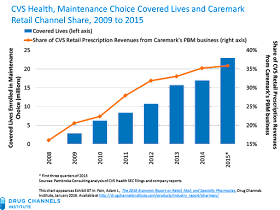 
But that leaves an opening for Walgreens to partner with other pharmacy-benefit managers. “CVS can’t have that same relations with other competing PBMs,” said Adam Fein of Philadelphia-based Pembroke Consulting, who tracks drug distribution. “Walgreens is using CVS Health’s strengths against it.” 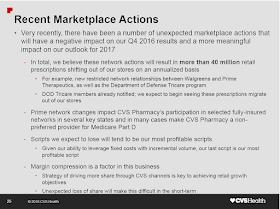 CVS Health’s losses correspond to Walgreens’ aggressive partnering strategy. As I told The Wall Street Journal: "Walgreens is trying to be the best friend of every PBM that’s not named Caremark." Here are the two relevant Drug Channels articles:
Note that CVS Health’s retail pharmacy business has backed away from Medicare Part D preferred networks. This volume was not included in the “lost” scripts that led to the 2017 profit figure. See Walgreens Plays to Win: Our Exclusive Analysis of 2017's Part D Preferred Pharmacy Networks.


“These major network changes quite honestly happened without a chance for us to actively engage and really tell our value proposition as these changes were contemplated in both Prime and with TRICARE. So from that perspective, we were kind of caught a little bit off guard.”

As they say: When you have to partner, partner. Don't talk.

The 40 million lost prescriptions account for less than 5% of CVS retail drugstores' volume. But these scripts to have a disproportionately negative impact on CVS Health’s retail profitability.

If you paid attention in your Econ 101 course, then you will be familiar with the concept of average vs. marginal costs.

For a typical pharmacy, total annual operating costs do not vary based on small changes in the total number of prescriptions dispensed. These costs include pharmacists’ high salaries and benefits and such general overhead costs as rent, utilities, insurance, advertising, computer systems, and other items. Consequently, the average cost of dispensing goes does down very slowly with each additional prescription filled. But the marginal (incremental) cost of dispensing one extra script is very, very low. (BTW, this is one reason “cost of dispensing” studies can be so misleading.)

On the earnings call, Larry Merlo, president and CEO of CVS Health, explained this brutal math:


“[W]e have always said that our last script is our most profitable one given our ability to leverage our fixed costs with incremental volume. And unfortunately, this means that the scripts we lose will tend to be our most profitable scripts, and as a result, we will de-lever, as a result of losing more than 40 million prescriptions.”

The pharmacy industry has entered a new period of hypercompetition, which will yield winners and losers. As Mr. Pessina reportedly has said: In this pharmacy world there's two kinds of people, my friend—those in narrow networks and those who dig. You dig.

I wonder if the Queen of England will be amused.