In a previous exclusive analysis (Preferred Pharmacy Networks Are Back in 85% of the 2017 Medicare Part D Plans), I highlighted how preferred pharmacy networks will dominate next year’s Medicare Part D prescription drug plans (PDP).

Today, I examine pharmacy participation in the 2017 Part D preferred networks. Our analysis shows some pharmacies getting more selective about plan participation.

I knocked on more than a few doors to collect this bagful of sweet data. Read on as we empty it to see which plans look sweet—and which might be tricks.
CANDY FROM STRANGERS

Preferred network models have grown rapidly within the Medicare Part D program. The Centers for Medicare & Medicaid Services (CMS) now calls these networks preferred cost sharing networks. CMS refers to the pharmacies in such a network as preferred cost-sharing pharmacies. For more complete background on narrow network models, see Chapter 7 of our 2016 Economic Report on Retail, Mail, and Specialty Pharmacies.

We then identified preferred pharmacies for each plan. Large pharmacies interact and negotiate directly with the plans. By contrast, smaller pharmacies participate in pharmacy services administration organizations (PSAOs) to leverage their influence in contract negotiations with the plans. We reviewed the largest eight retail chains and the four largest PSAOs. Our analysis therefore includes more than three-quarters of all U.S. retail pharmacy locations.

The plans and pharmacies don’t always make it easy to identify which chains are preferred. Send me an email if you think we got something wrong.

The first table below summarizes retail chain participation in the 17 major multi-regional Part D plans with preferred cost-sharing pharmacies. These eight retail chains operate about 33,000 locations, or about 70% of all retail chain locations. 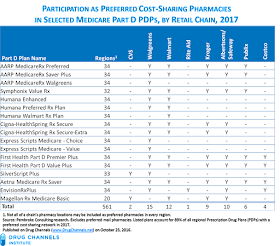 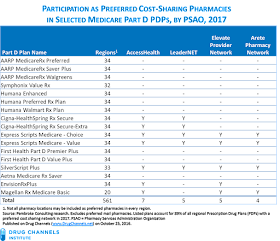 TRICKS OR TREATS?
A DIR THAT GOES BUMP IN THE NIGHT

The reduction in pharmacy profits is the biggest source of cost savings from these narrow networks. That’s why pharmacies find preferred networks so scary.

Medicare Part D plans rely on post-point-of-sale price concessions paid by pharmacies to the PDP sponsor. These price concessions, which are collected from pharmacies after claim adjudication, are the dreaded direct and indirect remuneration (DIR) fees that generate so many pharmacy complaints. A DIR fee directly reduces the pharmacy’s margins and the plan’s costs.

By not participating in a preferred network, a chain or PSAO avoids DIR fees. But they also miss out on the prescriptions from patients who aren’t willing to pay a higher copayment to use a non-preferred pharmacy.


"You hear the door slam and realize there's nowhere left to run. You feel the cold hand and wonder if you'll ever see the sun. You close your eyes and hope that this is just imagination. But all the while you hear the DIR creepin' up behind. You're out of profit.”

Here’s a video in which he delivers this message. Boo!