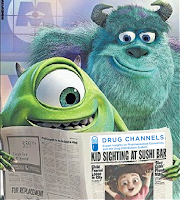 Boo! Time for my Halloween-themed roundup of Drug Channels news stories. In this issue:
Plus: Got a spare $22.5 million? Great! Then you can snag McKesson CEO John Hammergren’s secure eight-acre, 23,000-square-foot compound. Savor the video below and get ready to bid on November 15.

P.S. Watch out, Kim Kardashian! @DrugChannels now has nearly 3,100 followers on Twitter. You can follow along for daily tweets on cool studies and news that you might have missed.

The Wall Street Journal hammers the drug channel by highlighting the vast and growing discrepancy between a drug’s list price and the manufacturer’s net prices. The article states:


”This convoluted payment system for drugs in the U.S. encourages high list prices and steep behind-the-scenes discounts, and is becoming a regular source of public outrage, most recently with Mylan NV’s EpiPen, an emergency allergy treatment. The fragmented system offers some bill payers lower overall costs while uninsured patients and those with certain health plans pay more.”

This article nicely illustrates why the current system is becoming unsustainable, per my comments in EpiPen, Channel Economics, and the Great PBM Rebate Debate.
Estimate of Medicare Part D Costs After Accounting for Manufacturer Rebates, QuintilesIMS


The renamed QuintilesIMS Institute has released a neat new report on the Medicare Part D program. The key finding: “On average, the estimated net cost to Medicare Part D plans is 42.3% of the list price, after accounting for manufacturer rebates and patient cost sharing.” See page 6 of the new report for data on the variation in rebates across 12 therapy classes. Once again, we see that list price tells only part of the story, per the Follow the Dollar profit deconstruction.
Five Things to Know About the Mylan EpiPen “Settlement” – What It Is and What It Isn’t, Health Law & Policy Matters


John Hammergren, chairman, president, and CEO of McKesson Corporation, has long been one of the world’s highest-paid executives. Pony up the cash and you too can live like a drug wholesaling CEO in a very impressive and “technologically advanced” residence. According to the website, it’s a “23,000-square-foot compound made up of three structures: a main residence, a carriage house, and a state-of-the-art sports complex.”

The auction begins at 9 PM EST on November 15, 2016. Until then, please enjoy a video of some actors playing around in this sumptuous home.
ICYMI, McKesson recently did a sale-leaseback of its HQ and is expanding in Texas. Is McKesson getting ready to ditch San Francisco?
Adam J. Fein, Ph.D. on Thursday, October 27, 2016