Medicare Part D 2016: 75% of Seniors in a Preferred Pharmacy Network (PLUS: Which Plans Won and Lost) 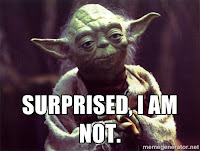 Just released data from the Centers for Medicare & Medicaid Services (CMS) confirms that preferred cost-sharing networks continue to dominate Medicare Part D. According to our exclusive analysis, 75% of seniors are enrolled in Prescription Drug Plans (PDPs) with preferred cost sharing pharmacy networks for 2016.

Read on for our latest look at the biggest companies and plans. In a future post, I’ll examine how Part D plans are building performance-based pharmacy networks.

DATA OR DATA NOT

JUDGE A PLAN BY ITS SIZE, DO YOU?

The top three parent organizations—Humana, UnitedHealthcare, and CVS Health's SilverScript—account for almost two-thirds of enrollment in stand-alone Part D plans. The top 10 companies (shown below) are 91% of enrollment. These figures are comparable to the 2015 figures. 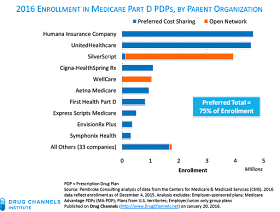 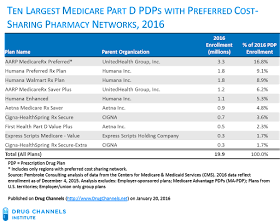 For a summary of pharmacy chains’ participation in preferred networks, see How the Eight Biggest Retail Chains (and Independents) Are Participating in 2016's Part D Preferred Network.

KNOW THE GOOD FROM THE BAD

Here are the 2016 highlights from some of the largest Part D plan sponsors:

Humana grows again. Humana is offering the same three plans as it has in the past two years: Humana Enhanced, Humana Preferred Rx Plan (its original plan with Walmart), and the co-branded Humana Walmart Rx Plan. All three plans have a preferred network and are being offered in all 34 regions. These three plans collectively garnered 4.6 million (23.3%) of total Part D enrollees. That’s 12% higher than Humana’s 4.1 million total from last January. The Humana Walmart Rx Plan had the largest increase in enrollment.

Data covering the entire open enrollment period will be released in February.

And if this all seems vaguely familiar, then you’ll know how I felt after seeing The Force Awakens. (I loved it anyway, in case you’re wondering.)
Adam J. Fein, Ph.D. on Wednesday, January 20, 2016