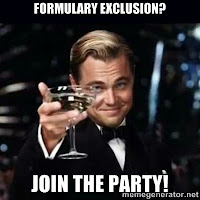 Ronny and his team found that four more companies—OptumRx, Aetna, Cigna, and Prime Therapeutics—will introduce or significantly expand formulary exclusions in 2016. Combined with the actions of Express and Caremark, they estimate that more than 50% of the commercial market will have access to exclusion lists.

Below is their summary of 2016 exclusion lists, by therapeutic area. Their analysis confirms my view that exclusions are the new normal. Expect continued growth in these lists, as payers scrutinize manufacturers’ copay card strategies in a post-Valeant market.

A BIT OF BACKGROUND

In Here Come the 2016 PBM Formulary Exclusion Lists!, I review the 2016 formulary exclusion lists for the two largest PBMs—Express Scripts and the CVS Health’s Caremark business. As I document in that post, the lists keep getting longer.

Here is what Ronny and his team found when analyzing six 2016 exclusion lists. 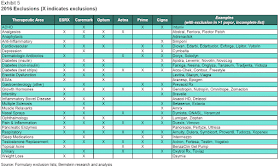 Here is their summary comments about the 2016 lists:


The lists suggest common area of focus where all lists have some exclusions. These are TAs with multiple therapeutic options: dermatology, pain, diabetes tests strips, growth hormone and testosterone replacement. As discussed above, these exclusion lists could be for now simply an enhancement of the pre-existing formulary preferences. However, we suspect that over time, exclusions would broaden to most formularies in these payors and with it, broader pressure. For example, we would worry that the dermatology specialty pharmacy model (used by most dermatology companies, not just VRX) will largely be a casualty of exclusions lists.

When we look at specific drugs in TAs of our interest, there are couple of interesting data points.

First, in GLP1, Optum is blocking Trulicity and Cigna is blocking Victoza – suggesting trend by payors toward single source award (and price pressure). This is concerning for the GLP1 market, where Novo certainly is hoping for more of an open formulary policy.

Second, in MS, Optum and Caremark are blocking several bINF and Cigna is blocking one. Interestingly, no drug company is blocking products in other drug classes. This suggests where the lines are drawn now. Payors are willing to select between products with same mechanism of action but not to completely exclude different MoAs – at least not in serious conditions like MS.

Third, there are very few exclusions in the respiratory class. This is surprising given the pressure we are seeing in drug manufacturer reports. We think the reason is that the drug companies have capitulated and provided payors with the discounts they were looking for.

Last, we are seeing Cigna introducing a block on Vyvanse. This is the first one we see, but does raise the specter that if additional Adderall XR generics are approved and the price of the older product is significantly reduced, Vyvanse would come under pressure.