The Office of Inspector General (OIG) has just released another eye-opening report on the 340B drug discount program: Part B Payments For 340B-Purchased Drugs. (Free download)

The report documents how 340B-eligible hospital outpatient departments earn tremendous profits from the Medicare Part B program. Physician offices, which also receive Part B reimbursements, are not as fortunate.

The OIG focuses on how the Medicare program could save money by sharing in these mega-profits. But as my summary chart below shows, Medicare appears to be providing incentives for shifts in cancer care treatment locations.

As usual, we don’t know if needy patients are benefiting from hospitals’ excess Medicare 340B profits. The OIG even reminds us three times in its report: “The 340B statute does not restrict how covered entities may use these funds.” Unfortunately, the Health Resources and Services Administration’s recent Omnibus Guidance didn’t bother to require that hospitals use 340B funds help the neediest patients access valuable medicines. Money, so they say, is the root of all evil today.

As you may know, the 340B program mandates that pharmaceutical manufacturers provide outpatient drugs to certain healthcare entities—known as eligible covered entities—at significant discounts. To be eligible for program participation, providers must be one of six designated hospital types or receive federal grants administered by different agencies within the Department of Health & Human Services (HHS). Hospitals must meet additional eligibility criteria that vary by hospital type.

Hospital outpatient departments can purchase oncology drugs using the 340B drug pricing program. Currently, such clinics must treat “eligible patients,” appear on the hospital’s Medicare Cost Report as a “child site,” be registered on the Office of Pharmacy Affairs (OPA) database, and meet certain other criteria.

GRAB THAT CASH WITH BOTH HANDS

In looking only at Medicare Part B program spending, the new OIG study found that hospital outpatient settings received discounted 340B pricing on an astounding 48% of all drugs. By comparison, physician offices received 340B pricing on only 2% of drugs. Here’s the data from page 8 of the report:

In a previous post, I estimated that in 2013, hospitals received 340B discounts on at least 25% of their drug purchases, compared with only 3% purchases in 2004. See EXCLUSIVE: 340B Is Taking Over the Hospital Market—With a 25% Share. For Part B, my figures underestimated 340B’s impact.

AND MAKE A STASH

For 340B hospitals, average gross margin (reimbursements minus acquisition cost) from their $3.2 billion in 340B purchases was 58%. For about one-quarter of the Healthcare Common Procedure Coding System (HCPCS) J-codes, gross margin exceeded 100%. Money, it's a hit! 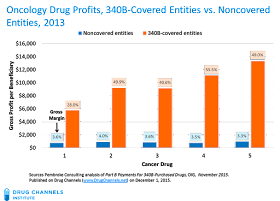 In section 6.2.2. (page 88) of our 2015-16 Economic Report on Pharmaceutical Wholesalers and Specialty Distributors, I explain how economic pressures are (1) encouraging oncologists to sell their practices to hospitals, and (2) shifting care from community practices to hospital outpatient departments. Make sure you check out Exhibit 59 of our report for a look at shifting sites of care for the top five specialty drugs paid under the medical benefit.

The latest OIG data support the idea that hospitals’ ability to use 340B discounts has contributed to practice acquisitions. As a 2014 policy statement from the American Society of Clinical Oncology notes:


“…the acquisition of oncology practices by 340B institutions may have the potential of unintended, market-distorting consequences by creating an uneven practice reimbursement environment favoring the survival of a 340B practice over a non-340B practice…”

BUT DON'T TAKE A SLICE OF MY PIE

For a subset of the J-codes, the OIG found that a beneficiary’s coinsurance was greater than the hospital’s acquisition cost. In a footnote, the OIG tartly states: “We did not confirm whether beneficiaries in fact paid the Part B coinsurance for 340B-purchased drugs.”

A recent, unrelated study implies that some 340B hospitals simply pocket the extra profits. This New England Journal of Medicine paper examined the behavior of “charitable hospitals.” As this summary notes:


“Only 42 percent notified patients of their eligibility for charity care before attempting to collect medical bills and only 29 percent had begun charging uninsured and under-insured patients rates equivalent to private insurance and Medicare rather than standard, higher chargemaster rates.”

These unaccountable profits bring to mind Heartland Regional Medical Center, a 340B-covered entity that sued its poorest patients—including the ones that were eligible for charity care. Shameful.


“To ensure that the program’s funds are being used appropriately, Congress should require that hospitals fully disclose how they use their 340B pharmacy profits. By allowing hospital’s to retain and then spend all 340B pharmacy profits, neither Medicare nor patients benefit from 340B drug discounts...It’s time to modernize the 340B program and help the neediest patients access valuable medicines.”

Based on recent hospital lobbying activities, I presume that hospitals’ response to this latest 340B expose will remain unchanged: “I certainly was in the right.”