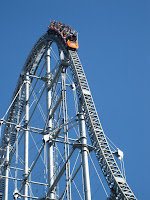 Looks like stock prices aren't the only things that have stopped rising. As we predicted in April, generic price increases are slowing down.

For the second quarter of 2015, we again found that generic drug price increases were lower than our previous examinations. So far in 2015, no drugs have had with mega-increases that exceed 1,000%. Below, I highlight comments by executives at the large wholesalers that confirm our slowdown analysis.

A separate RBC Capital Markets study (shown below) found an inflection point in the Food and Drug Administration’s (FDA) approval of new generic drugs. If the trend continues, new supply will enter the market and generic prices will decline. Hello, Econ 101!

Meanwhile, the pharmacy industry’s lobbyists may find that faster MAC updates may be quite painful if generic prices start falling. Wheee!

For this latest analysis, I compared the July 2015 data release (dated 7/9/15) with the previous quarter’s file (dated 4/1/15). The sample size was 1,915 drugs. Note that I define a drug as an ingredient/strength combination, so that each manufacturer’s version of the same drug has the same price in the analysis. If I had considered each manufacturer's version of an ingredient/strength combination to be a separate drug, then the sample size would have been five to six times larger. (This is a limitation of the NADAC data.)

The chart below shows acquisition cost increases during the second calendar quarter of 2015. About half of the generic drugs increased in cost, just as they had in our April 2015 analysis. However, the increases were much lower than those in our 2014 examinations. 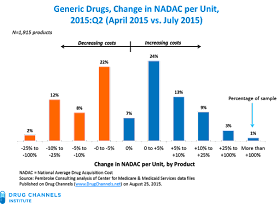 WHAT THE WHOLESALERS SAID

Generic inflation lifts a wholesaler’s revenue and profits. As I noted in August 2014’s Winners and Losers from Generic Drug Inflation, wholesalers benefit from generic price increases, which can typically be passed onto their pharmacy customers. When a wholesaler’s mark-up remains constant, gross profit dollars increases along with drug costs.

Over the past couple of years, investors have consistently questioned the public wholesalers about generic inflation trends. During earnings calls for the second calendar quarter of 2015, wholesalers confirmed that generic inflation has moderated. Here are two representative comments from McKesson and AmerisourceBergen executives:

IS THE FDA BACKLOG CLEARING?

In Retail Generic Drug Inflation Eases, but the FDA Keeps Prices High, I explained how the FDA's backlog of generic drug approvals could be supporting higher generic prices. (See the final section of that post, titled “WHAT’S NEXT?”)

Randall Stanicky at RBC Capital Markets has been tracking the FDA’s (in)action more closely than anyone else. His most recent analysis shows that generic approvals have accelerated since April. The chart shows the growing backlog and annual approvals. 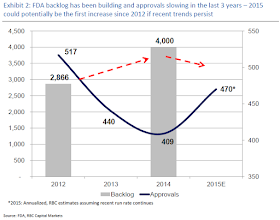 
“If the recent pace of approvals is sustained throughout 2015 new approval activity would show an increase for the first time since 2012, setting the stage for what is likely a further increase in 2016 given stepped up GDUFA timelines. This is important because there is a sizable backlog of close to 4,000 unapproved ANDAs and visibility into those files is limited.

As it gets worked down we suspect there could be several surprises and instances where markets with limited competition see new players for the first time which could have potential pricing implications but also the opportunity for positive pipeline surprises for many companies.”

Ironically, presidential candidate U.S. Sen. Bernie Sanders (I-VT) had railed against manufacturers for generic inflation, when the solution appears to have been faster government action. As the late great economist Milton Friedman reminded us:


"The great danger to the consumer is the monopoly -- whether private or governmental. His most effective protection is free competition at home and free trade throughout the world. The consumer is protected from being exploited by one seller by the existence of another seller from whom he can buy and who is eager to sell to him. Alternative sources of supply protect the consumer far more effectively than all the Ralph Naders of the world."

The pharmacy industry may also find itself learning about markets. Despite the inflation slowdown, the pharmacy industry continues aggressively lobbying for legislation that mandates faster updates to generic maximum allowable cost (MAC) reimbursement limits. Ironically, such speedier updates will end up hurting pharmacies if generic prices start deflating. Lesson: Be careful what you lobby for!