You gotta strike when the moment is right without thinking. And its looks like the Centers for Medicare & Medicaid Services (CMS) might finally be doing so.

Apparently, the oft-delayed Federal Upper Limits (FUL) and the Final Rule on Covered Outpatient Drugs, a.k.a., the Average Manufacturer Price (AMP) Final Rule, is now officially under final review at the Office of Management and Budget (OMB). The announcement is pasted below, because you probably don't believe it either.

Does this mean that CMS will finally accomplish this policy goal? How quickly will the pharmacy industry sue to stop implementation? Are you wondering which of the buggars to blame for the delay?

Read on for the proof and some background. 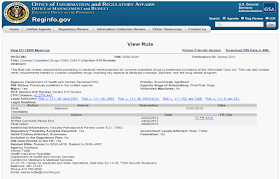 But intriguingly, the OMB's List of Regulatory Actions Currently Under Review webpage just updated its website to state that the rule was received on 08/04/15. Screen cap below. As far I understand it, the OMB review is the last step before the rule is finalized.

Hey, I'm sure the Final Rule can still be delayed until the sometime after the universe collapses into a dimensionless singularity. But don't hide your head in the sand. Instead, you can learn about AMPs and FULs from sections 5.3.4. (page 94) and 8.2.5. (page 145) of my 2014–15 Economic Report on Retail, Mail, and Specialty Pharmacies.

In the meantime, keep watching for pigs on the wing.