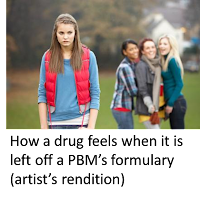 CVS Caremark’s 2016 list has 124 products, including 31 new additions. Express Scripts, which is much more public about its strategy, has only 80 products and fewer additions to its list.

Below, I share some observations on each company’s strategy, differences in each PBM’s approach to specialty drugs and the hepatitis C category, and other related topics. I also provide links, so you can download and review the complete 2016 lists yourself. Enjoy!

Additionally, you can find links to the 2015 lists in this August 2014 Drug Channels post: The 2015 PBM Formulary Exclusion Lists are Here!

The lists keep getting longer.The chart below shows the number of drugs that have been excluded annually. There are 80 products on Express Scripts’ 2016 formulary exclusion list, compared with 66 on its 2015 list and 48 on its 2014 list. CVS Health’s new list has 124 products, compared with 95 products on its 2015 list. As far as I know, Caremark became the first PBM to publish an exclusion list, when it removed 34 drugs from 2012’s standard national formulary. 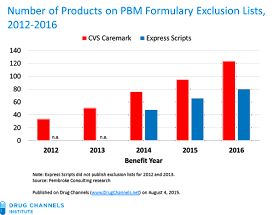 On AbbVie’s recent earnings call , CEO Richard Gonzalez noted that Viekira Pak had “reached peak share” at its largest customer (presumably Express Scripts) and that “it’s a very high level of share.” (source) I wonder if Express Scripts will elaborate on its January promise that its clients would save “more than $1 billion” by favoring Viekira Pak?

I also wonder how Merck's forthcoming new combination product will shake up this category.

The big PBMs are taking different approaches to specialty drugs. On its 2015 list, Express Scripts excluded the multiple sclerosis treatment Betaseron, from Bayer. This drug was reinstated for 2016, suggesting that Express Scripts either (1) is not willing to go after a big specialty spend category, or (2) has negotiated big discounts when there are multiple therapeutic options for patients. (In 2014, MS treatments accounted for 17% of gross specialty spending, according to the Express Scripts 2014 Drug Trend Report.) Or perhaps Express Scripts is betting on the rapid uptake of Sandoz’ Glatopa, a generic version of Copaxone 20 mg?

By contrast, CVS Caremark’s list excludes multiple sclerosis therapies Avonex, Extavia, and Plegridy in favor of five other options: Aubagio, Betaseron, Copaxone, Gilenya, and Rebif. CVS Caremark also included this provocative statement about specialty drugs: "As new specialty products launch, all existing products in the class will be re-evaluated to determine appropriate formulary placement and potentially excluded, added back to formulary or not listed." Hmm...

Here’s another notable difference: Express Scripts excluded Amgen’s Aranesp and Epogen, though both products are typically reimbursed under the medical (not pharmacy) benefit. CVS Caremark’s list doesn't even mention these products.

Each PBM is aligned with a different insulin maker. Express Scripts excluded Novo Nordisk’s NovoLog and Novolin in favor of Eli Lilly’s Humalong and Humulin. However, CVS Caremark’s formulary excludes Lilly’s insulins in favor of the Novo Nordisk products.

We don’t know the real impact of exclusion lists. By dropping products to gain negotiating leverage, PBMs get significant marketing advantages with their plan sponsor clients. Basically, the PBMs can claim to be standing up to pharma on behalf of payers, regardless of the actual dollar or patient impact.

Express Scripts asserts that its exclusions will save $1.3 billion in 2016, but have minimal impact on patients, stating: “In 2016, fewer than 0.5% of our NPF members will be asked to use a different medication that achieves the same health outcome than one they are currently using.” I’m not aware of any independent verification of these savings.

Exclusions are the new normal. Now that the concept of an exclusion list is well established, manufacturers have had time to adjust contracting and marketing strategies. There were even some modest upsides for such companies as GlaxoSmithKline and Lilly, because Express Scripts reinstated previously excluded products from these companies. Of course, we don’t know what manufacturers had to pay for reinstatement.

But as I noted in 2013, manufacturers shouldn't be surprised by this inevitable consequence of the generic wave. Brand-name drugs will continue to face enormous pressure for price and rebate concessions. A tier 3 formulary position no longer guarantees cost-effective patient access.

Did I miss anything major? Please add your own observations on the new 2016 lists in the comments below.