More than One in Four U.S. Pharmacies is Now a 340B Contract Pharmacy; Walgreens Still Dominates

Since we first deeply examined contract pharmacies, two years ago, they have grown by 4,600 locations (+37%). Specialty pharmacies’ participation also is up sharply.

To profile the 340B contract pharmacy market, Pembroke Consulting examined HRSA’s Contract Pharmacy Daily Report, as published on July 5, 2015. We screened out all contracts that were terminated before 7/1/15. Using our proprietary database, we classified all contract pharmacy locations by parent organization.

You can download the data from HRSA’s 340B Drug Pricing Program Database page. 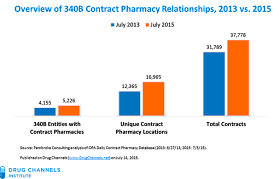 Since 2010, the number of contract pharmacy locations has grown by almost 600%! Must be a good business! 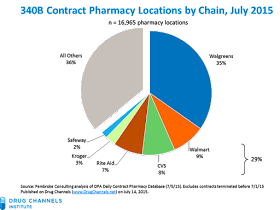 Section 8.5 (page 160) of our 2014-15 Economic Report on Retail, Mail, and Specialty Pharmacies  tracks the flow of funds and product in a 340B contract pharmacy network. Rather than earning traditional dispensing spreads and fees, 340B contract pharmacies earn per-prescription fees paid by the 340B entity. These fees can include fixed dollar payments as well as revenue-sharing arrangements. Thus, a pharmacy trades its normal profit margin for the contract pharmacy payments.

Pharmacies’ profitability from this government program remains top secret. However, we estimate that hospitals often pay fees that are two to three times larger than a pharmacy’s typical gross profit from a third-party payer.

Some pharmacies work with many covered entities. Here are the pharmacy locations with the most contracts:
WHY WE SHOULD CARE

Many of these pharmacies are part of hospital mega-networks. Just 310 healthcare providers—about 1 percent of all 340B covered entities—account for more than 40% of the program's 38,000 contract pharmacy agreements. Of the 310 providers, 166 are disproportionate share hospitals and 113 are children’s hospitals. This small group has built networks that average 52 pharmacies, but some have nearly 300 pharmacies.

These mega-networks are designed seemingly to enrich hospitals and pharmacies, not to benefit needy and uninsured patients. In last year’s One Percenters: The Real Facts Behind Hospitals' 340B Contract Pharmacy Mega-Networks, I outlined the following four questions about these networks:
As I have argued before, some 340B entities truly require additional financial support. However, there are others that appear to be taking advantage of the program by using 340B revenues in ways that can’t be linked to the drug discount program’s initial purpose.

Consider this telling example from Transparency: Best Medicine for drug-Pricing Program, a recent editorial about the 340B situation in Kentucky:


"For instance, there’s a stark difference in Louisville between University Hospital, where, according to the Centers for Medicare and Medicaid Services, charity cases comprised nearly 10 percent of their patient load in 2014, and Norton Healthcare, which, despite $1.5 billion in revenues and 53 contracted pharmacies, reported less than 1 percent of vulnerable patients. Still, both are considered 'Disproportionate Share Hospitals,' allowing them to purchase highly discounted 340B medicines."


"Medicare uses a statutorily defined formula to pay hospitals at set rates for drugs, regardless of their costs for acquiring them, which CMS cannot alter based on hospitals’ acquisition costs, and the 340B statute does not restrict covered entities from using drugs purchased at the 340B discounted price for Medicare Part B beneficiaries. Consequently, there is a financial incentive at these hospitals to prescribe more drugs and more expensive drugs to Medicare beneficiaries in order to maximize the revenue generated by the difference between the cost of the drug and Medicare’s reimbursement." (emphasis added)