How 2015’s Payer and Pharmacy Consolidation Will Affect Drug Wholesalers

It has been a record year for corporate mergers and acquisitions. Aetna’s recently-announced acquisition of Humana is just the latest of the many mega deals reshaping U.S. drug channels

Today, I examine how six major 2015 transactions could impact pharmaceutical wholesalers. As you will see below, both McKesson and Cardinal Health could experience revenue shifts. Consolidation and acquisitions, however, generally hurt wholesalers’ margins, because the acquired companies consolidate their buying power.

Scott Adams, the creator of the comic strip Dilbert, once opined: “There is no idea so bad that it cannot be made to look brilliant with the proper application of fonts and color.” Sound advice for evaluating deals in this consolidating marketplace.

Here are the key transactions included in our review. Except for the Aetna-Humana combination, the links take you to the relevant Drug Channels analysis:
The table below shows the primary drug wholesalers that supply both the acquiring and the acquired companies. 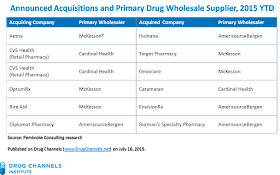 Here are some observations on the four largest transactions:

Big deals have a funny way of spawning more deals. More disruption ahead.