Below, I summarize the report’s findings on drug reimbursement methods and costs for provider-administered drugs paid under a patient’s medical benefit. As you will see, commercial payers often reimburse hospitals based upon the hospitals’ fabricated sky-high “charges.” Meanwhile, physician offices receive drug reimbursement based upon the government’s Average Sales Price (ASP) metric.

Such top-selling specialty drugs as Avastin, Neulasta, and Remicade cost two to three times as much in a hospital outpatient facility than they do in a physician office. (See table below.) This inflates drug costs by thousands of dollars per claim, fuels hospitals’ acquisition of physician practices, and accelerates the growth of the 340B Drug Pricing Program. Read on and be perturbed.

The 2014 Medical Pharmacy Trend Report draws upon self-reported survey responses from medical, pharmacy, and clinical directors at 48 health plans, representing 125.1 million covered lives. The survey was conducted in mid-2014. Fifty-eight percent of the respondents participated in last year’s survey. The report also includes a useful analysis of medical claims data, which I highlight below.

Be careful, however, when reviewing the results. Some survey responses are weighted by covered lives, while others are presented as unweighted responses, i.e., percentage of plans.

The report has a lot of data—perhaps even too much. Just my $0.02, but the report would have benefited from better organization and a tighter editorial focus.

From the provider reimbursement data on pages 17-28, I developed the summary chart below. 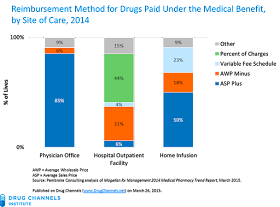 As you can see, payers used highly different reimbursement methodologies for each channel.

These reimbursements apply to drug purchased under a buy-and-bill model. According to the Magellan report, 24% of physician offices drug volume was sourced from specialty pharmacies, a.k.a., white bagging. (See section 3.7.4 in the 2014–15 Economic Report on Retail, Mail, and Specialty Pharmacies.) Buy-and-bill accounted for only 64% of physician office medical benefit drug volume.
The Magellan report correctly refers to charges as “an arbitrary way of establishing fees for services versus more transparent methods based on drug rate benchmarks such as ASP, WAC or AWP.” On average, the report notes, payers reimbursed hospitals at 66% of billed charges. A percent-of-charges approach allows a hospital to get paid much more than a physician office. For particularly shameful examples, look below. You’ll see Magellan’s comparison of reimbursements for comparable drugs in different care settings.
HOW MUCH?

The Magellan report provides the ASP and AWP payment computations for two of the three sites of care. The table below summarizes the results. As you can see, commercial payers pay larger mark-ups than Medicare Part B's ASP+6% (or +4%, under sequestration).

Note that these figures do not apply to newly-released, unclassified medical benefit drugs. Payer reimbursement for these products—documented separately in the report—is based generally on AWP.

For commercial payers, hospitals’ percent-of-charges approach allows them to be paid two to three times as much as physician offices. Here’s a key table that’s buried on page 86.

Consider Remicade, which appears in the third row. Hospital outpatient facilities received more than $8,000 per claim, while the other sites of care received +/-$4,000. Nice work if you can get away with it.

Most patients are shielded from these price discrepancies, because their cost share usually doesn't vary by site of care. (See the report’s Exhibit 44.)

Average CEO compensation at so-called not-for-profit hospitals was $2.2 million. (source) Some earned much, much more. Perhaps these executives should look in the mirror before complaining about pharmaceutical company pricing.